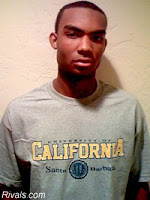 Look for Chris to have an explosive senior year at St. Mary's, as he and his teammates target another run at the California Div. IV State Basketball Championship. St. Mary's lost in the title game last season, garnering second place: CIF 2008 State Tournament
Posted by Gaucho Greg at 2:42 AM