http://scout.com/college/basketball/recruiting/Article/Four-star-2018-NorCal-SF-Jay-Nagle-commits-to-UCSB-106519108/
Posted by Gaucho Greg at 12:31 AM No comments: 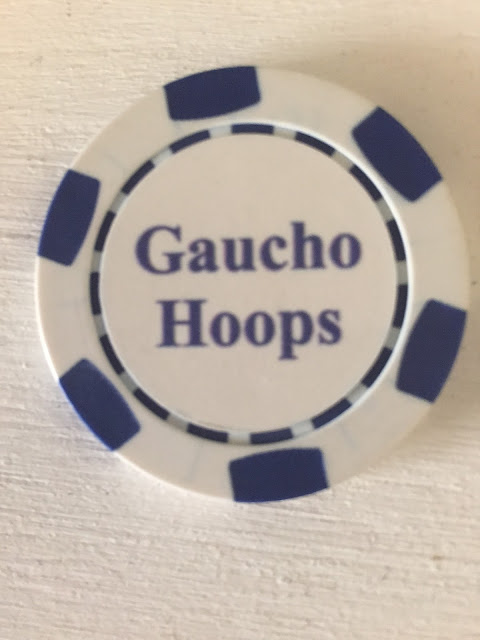 Posted by Gaucho Greg at 7:13 PM No comments:

Posted by Gaucho Greg at 4:04 PM No comments:

It looks like UCSB is still in the running for the recruitment of Danya Kingsby but not for Charles Jones, Jr. both from College of Southern Idaho.

Posted by Gaucho Greg at 1:39 PM No comments:


GH:  Let's start with your career in chronological order.  Describe your time at Indiana University and what you took away from Coach Bobby Knight.

JP:  I was at IU from 1995 - 1999 as a student. Coach Knight knows how to teach the game of basketball, including game preparation and how to prepare a team to play an opponent. He taught us how to run a practice, did extensive video study, including self-scouting and scouting opponents.


GH:  Coach Knight implemented the motion offense and man defense.  What wrinkles have you incorporated?
JP:  The type of offense doesn't matter as much as execution.  It's all about execution, setting screens and using screens, both on- and off-ball screens.


GH:  It sounds like you learned a lot from Coach Knight on how to organize and run a basketball program.
JP:  Yes.


GH:  What did you learn from your stint at Cal with Coach Ben Braun?
JP:  I was very fortunate that Coach Braun gave me an incredible opportunity at the young age of 22 as a video coordinator, and at 24, I became the youngest assistant coach in the country.  It gave me the opportunity to recruit the state of California, the west coast, nationally and worldwide.  Coach Braun gave me a lot of responsibility for really my first job.  I'm really grateful for that.
I recruited players from countries like Spain, Israel, and Serbia.  That was a great experience.
Coach Braun was an incredible fund raiser, raising money for his program.  I learned that from him.
He won at a high level, and was the second-winningest coach in the history of Cal basketball.


GH:  What did you put into place at New Orleans?
JP:  At age 30, I became a head coach at New Orleans, following Buzz Williams, who was there 9 months.  I arrived a year after Hurricane Katrina.
We had a great first year, beating North Carolina State, Colorado, and Tulane.
Unfortunately, because of lack of funds, with enrollment dropping from 17,000 to 10,000 students post-Katrina, the athletics program was funded only by student fees which prompted the program to move down to Div. 1 Independent.  It was an uphill battle.
After my contract ended, I wanted to stay at the  Div. 1 level, so I went to Arizona.

GH:  What did Sean Miller implement while at AZ?
JP:  I learned how to build a comprehensive program.
This included skill development, practice planning, offensive game planning, a defensive system, a Pack Line defense. How to build an entire program,  recruiting, roster management, and academics.

We're going to run a fast paced offense to get good shots.  If the shot is not there, we want to create an offense that yields high percentage shots.  And it starts with defensive rebounding and talented players.


GH:  Speaking of talented players, what kind of student-athletes are your recruiting?
JP:  We're not going to get the same players as Arizona got, but we're going to recruit the highest level players for this place.  We are swinging for the fences, and hopefully we can land the players looking at lower PAC 12 schools and at the Mountain West, and who want to come and be a part of this.


GH:  Can you comment on returning players and new incoming players?
JP:  I can't comment on the newcomers, but the returning guys:  we're really excited about them.  They are home for the summer.  They will be back August 7.


GH:  Thanks, Coach.  Now let's get to some questions from Gaucho Hoops fans.  What comes first?  Student support or Men's Basketball winning?
JP:  That's a great question. For our first home game, we want to have all the students there and get the Thunderdome packed.

We will have the players and coaches on campus promoting the men's basketball program as soon as school begins.  We'll help the players promote the program during move-in at the freshman dorms, be involved with kids and put ourselves in the student community, including the fraternities and sororities.  We will work on drumming up interest.


GH:  Who will run the point guard position?
JP:  Marcus Jackson and Max Heidegger:  we will play a 2 point guard system similar to what we did at Arizona, where both need to be able to handle ball.


GH:  What is Gabe Vincent's rehab timetable?
JP:  Gabe is doing really well, ahead of schedule on his rehab.  We are really excited at his progress.  He is expected to play this year.


GH:  Can you share your thoughts on the strengths and weaknesses of Jalen Canty and Ami Lakoju? Will one or both start?
JP:  Both are very talented athletes and we are really excited to have them on the court.  Jalen can score in the paint and rebounds well  Ami scores and rebounds well also, and has incredible explosiveness.


GH:  Will Alex Hart play the stretch 4 or stay in the paint?
JP:  Alex is versatile inside and outside.  He's had a really good spring and summer, and is shooting the ball well.  He averaged seven rebounds a game last year and will be a big help next season.


GH:  What about the backcourt returnees?

JP:  All our freshman guards from last year:  Max Heidegger, Clifton Powell, and Christian Terrell are improved. The most difficult year in college basketball is freshman year, and the biggest improvements occur after the freshman year.  We expect them to step up big for their sophomore seasons.

GH:  What makes UCSB a sleeping giant?  What do you like about the community?


GH:  What challenges will you and the program have to overcome?
JP:  The #1 challenge and opportunity is fan support.  That's my #1 goal, to reach out to the community:  Santa Barbara, Goleta, Montecito, but importantly, getting student support and filling up the Thunderdome at our very first home game.  The coaches, players and myself, we're going to hit campus on move in day and promote the men's basketball program.  We're going to reach out to the freshmen and the dorms, the fraternities, sororities.

GH:  That covers most of the questions I had.  Thanks for the great interview, Coach.
Posted by Gaucho Greg at 5:22 PM No comments: Posted by Gaucho Greg at 2:29 PM No comments:

Posted by Gaucho Greg at 1:51 PM No comments:

http://leedsforce.co.uk/2017/07/star-guard-childress-signs-for-force/
Posted by Gaucho Greg at 8:51 AM No comments: