Posted by Gaucho Greg at 5:46 PM No comments:

Countdown to 2015–16: Gabe Vincent is ready to usher in a new era at UC Santa Barbara 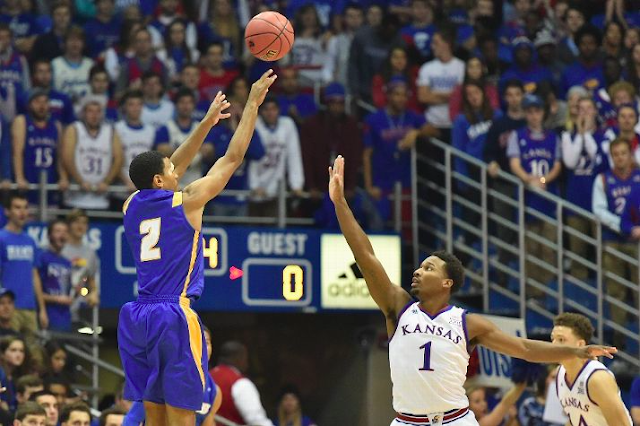 UC SANTA BARBARA
• UC Santa Barbara appeared in the postseason for the seventh time in the 17-year head coaching tenure of Bob Williams, closing out the 2014-15 campaign at 19-14 overall after playing in the College Basketball Invitational.  The Gauchos return three starters, but must deal with the losses of Alan Williams, the Big West’s No. 2 all-time leading rebounder, and starting point guard Zalmico Harmon.

• Senior Michael Bryson was selected All-Big West First Team after emerging as one of the league’s top wings in 2014-15.  He was the ninth-leading scorer (13.9 ppg) in the Big West and his 1,043 career points is tops among active players.  He became the 27th player in school history to eclipse 1,000 career points with 22 points at Hawai‘i on Mar. 4, 2015.

• Despite playing in a total of just four games during the 2011-12, 2012-13 and 2013-14 seasons due to an assortment of injuries, John Green had himself a productive, and healthy, junior campaign.  Competing in all 33 games (19 starts), Green finished as the third-leading scorer (11.3 ppg) on the Gauchos and received all-conference honorable mention recognition.

• UCSB also welcomes back the Big West Freshman of the Year in guard Gabe Vincent.  Draining 57 three-point baskets, second-most all-time by a UCSB freshman, Vincent ranked fourth on the team in scoring (10.1 ppg).  He was third in assists (60) against just 28 turnovers.  Vincent reserved two of his best games for the end of the season, collecting a career-high 25 points at Hawai‘i and 22 against Oral Roberts in the CBI First Round.

COACH BOB WILLIAMS SAYS:
“Your job as a coach is to put the ball in the hands of the player that you gives you the best chance to win games.  Al (Williams) was the most productive player in the country the previous two years, so Al touched the ball more than any player in Division I basketball the last two years.  Now the players that give us the best chance to win games are going to be our twos, our threes and our fours.”


Who’s the biggest threat to UC Irvine? One option is UCSB, even with the graduation of Alan Williams. Head coach Bob Williams welcomes back three of last season’s top four scorers led by senior guard Michael Bryson. The Gauchos will need junior Eric Childress to take a step forward at the point, and in sophomore guard Gabe Vincent they have a player who can be an All-Big West selection in the very near future. UCSB’s greatest question mark lies in the post, where it would be unfair to expect one player to “replace” Alan Williams. But if they can get a collective effort on the boards, UCSB can threaten for the Big West’s top spot.

Redshirt freshman center Ami Lakoju was the most vocal Gaucho when they were running 4-man weave drills and the jailbreak offense, with and without opposing defenders.  He also appeared to be hustling the most, showing surprising speed and athleticism, in addition to his strength.

Freshman forward Maxwell Kupchak also hustled, with speed and agility in his wiry 6'7" frame.  He dived for several loose balls.

Freshman wing Justin Burks is a natural athlete with an easy release on his jump shot, although it appears his release appears a touch slow.

The "first" team during these drills are:  TJ Taylor, Gabriel Vincent, Michael Bryson, John Green, and Sam Beeler.  The second team consisted of:  Eric Childress, Dejuan Smith, Mitch Brewe, Justin Burks, and Alex Hart.  The third team was:  Grant Troutt, Jarriesse Blackmon, Lakoju, and Kupchak.  Aside from Bryson, Green, and Vincent being sure starters, the other spots are up for grabs, with the battle for point guard duties being most intense with Childress and Taylor in the running.  The logjam at the 5 spot will include Beeler, Brewe, Lakoju and Tyler Jackson.

Jackson ran with the fourth team, and he seemed to labor a bit with his stride, which they are working to improve on.  John Green had to work on modifying his running stride over the years to prevent further injuries to his feet, to resounding success.

Gaucho Hoops ("GH"):  How will this team stack up this season, Coach Williams?

Coach Robert Williams ("BW"):  We will run more this season.  Right now, the guys are not in shape, so we're running conditioning drills to get in some cardio work.  Up to this point, we've been working on skills, but we are now working on their conditioning.

GH:  This team's make up is obviously different without Big Al [graduated center Alan Williams].  What changes do you foresee?

BW:  Without the big fella in the middle, the offense doesn't revolve around him getting maximum touches.  The Big 3 of Vincent, Bryson, and Green are so good that we have many options for them on offense.  They'll have more scoring opportunities as we open up the floor for them to penetrate, post up, or knock down the outside shot.

GH:  Will the offense look more like when OJ [Orlando Johnson] and Nunn [James Nunnally] were playing?

BW:  Yes, we took advantage of their dominance on the wings, too.  But OJ and Nunn were better at posting up than our wings on this team.  Although, John is very good at posting up his man.

GH:  You're looking to run more this season.  Will you apply more defensive pressure on the perimeter, too?

BW:  I'm not sure yet.  Every team has an identity, including on defense, so we'll have to see how this team plays defense.

GH:  So do you anticipate mixing up the defenses again, between the zone and man-to-man?

GH:  What do you anticipate the starting line up to be?

BW:  Bryson, Vincent, and Green.  TJ and Eric will share point guard duties.  We'll probably rotate Sam and Mitch at the 5, depending on the matchups.  Sam, Mitch, and Ami will share the duties at the 5.  We're not looking to replace Big Al's numbers on offense, but we are looking for rebounding production and toughness on defense.


GH:  What about the newcomers and other returnees?

BW:  Jarriesse has a good outside shot.  Ami will get minutes.  We monitor his heart rate and he's been cleared to practice for months.  Tyler is working with the big men at times as we are limiting his running as we work on his running stride.  He has great hands for a kid his size, and is a very smart player.  Maxwell is fundamentally very sound and skilled.  We are very fortunate to recruit him here.  He was doing great in August due to his skill set, but with lack of conditioning, he is coming down to earth in September.  But he will be a good one as he improves his conditioning and gets stronger.

In fact, that's true with all the freshmen and even the veterans.  As the players get tired, they get sloppy and commit more mistakes, and make bad decisions.  That's why conditioning and why running the drills when they are tired is so important.

The jail break offense opens up the floor, especially for the wings.

BW:  Aside from the differences between OJ and Nunn already mentioned, Jaime Serna provided more offense and agility on those teams.  With the 5 spot on this team, we want defense and rebounding from the rotation of Beeler, Brewe, Lakoju, and Jackson.  With Big Al, we got scoring and rebounding in the low block, and passing out of the post.

This year's team will more resemble the teams of Mark Hull, Branduin Fullove, Nick Jones and of Alex Harris, Chris Devine, and James Powell.  The 2, 3, and 4 spots will be our strongest positions with Vincent, Bryson, and Green.

We will emphasize side posts, isolations in the post (with John Green) and double screens.  The goal is to open the floor and create driving lanes.

GH:  Who will be the best teams in the Big West?