The UCSB Men's basketball team was defeated by Cal. Poly, San Luis Obispo 60 - 57 at Mott Gym. The loss snapped the Gauchos' (17 - 9, 11 - 4) six-game winning streak, while the Mustangs improved to 11 - 17 overall, 7 - 8 in the Big West. Orlando Johnson was the only Gaucho in double figures with 21 points, while James Nunnally pulled down a team-high eight rebounds, followed by Jaime Serna and Johnson with seven boards each.

UCSB lost the game by converting only 34.0% of their field goals and 56.5% of their free throws. The Gauchos were also out-rebounded by the shorter Mustang lineup 46 - 39. The Mustangs trailed most of the game, before making their final push near the end of the game by creating turnovers and hitting their perimeter shots.

Charles Anderson led a balanced Mustang attack with 15 points, including five 3-pointers. Shawn Lewis had 14, followed by Lorenzo Keeler with 12, and David Hanson with 11. Hanson dominated the boards with 17 rebounds, while Anderson chipped in seven.

Despite the loss, the Gauchos return to the Thunderdome still in first place in the Big West Conference, as they close out the regular season against UC-Irvine on Wednesday, March 3 at 7 pm. It will be the last home game at the Thunderdome for seniors James Powell and Paul Roemer, who will be saluted prior to the game.

UCSB has clinched at least a 2nd seed for the Big West Tournament in Anaheim, ensuring them a bye into the semifinals on Friday, March 12.

Box Score
Posted by Gaucho Greg at 5:40 PM No comments: 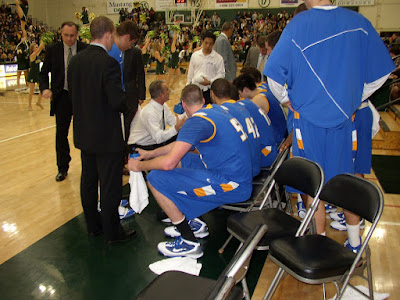 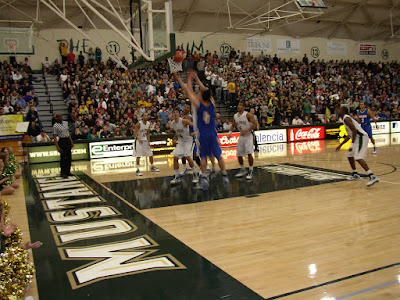 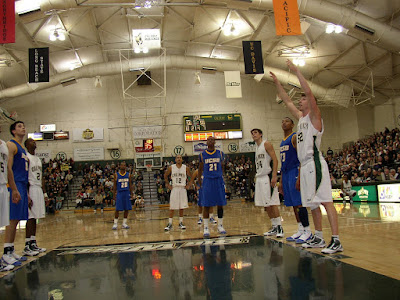 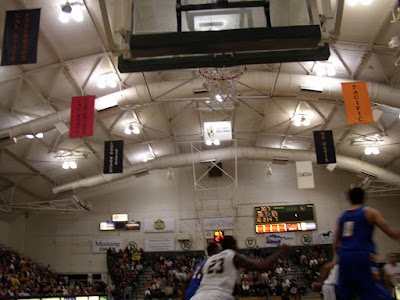 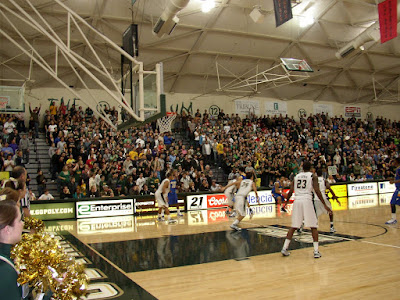 Posted by Gaucho Greg at 1:20 AM No comments: 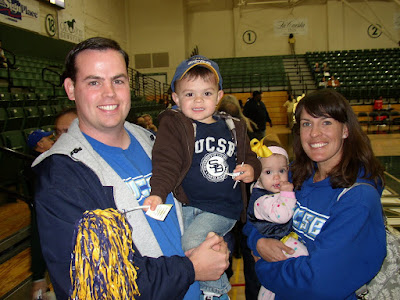 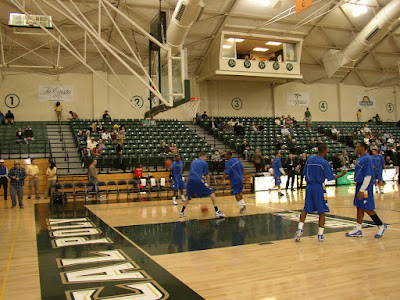 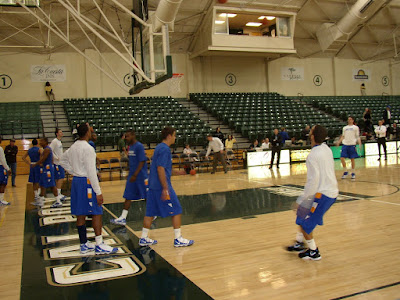 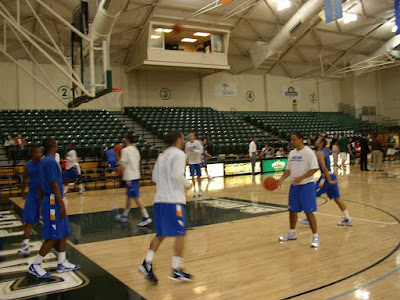 Pre-game warmups.
Posted by Gaucho Greg at 1:11 AM No comments:

UCSB Men's basketball coach Bob Williams dissects the Gauchos after a Big West Conference victory over CSUN at the Thunderdome:

This Week in Gaucho Sports, Feb. 25

This is a nice weekly segment from the UCSB Athletics Department from February 25, It includes upcoming games and events, as well as highlights from the CSUN game and other Gaucho sports:

These are highlights of UCSB's victory of CSF 73 - 65 in Fullerton State's Titan Gym, courtesy of Keep Digging Productions.

The UCSB Men's basketball team built a 26-point lead in the second half, before Cal. State-Northridge staged a furious rally that just fell short 74 - 69 in favor of the Gauchos (17 - 8, 11 - 3). Orlando Johnsonn led a balanced attack with 19 points, followed by James Powell's 17 points, including some clutch free throws to ice the game. Jaime Serna and James Nunnally chipped in 15 points each. Serna had six rebounds, followed by Nunnally's five boards, while Johnson had a team-high seven assists.

The Matadors (10 - 18, 5 - 8) were led by Kenny Daniels with 23 points, followed by Mark Hill with 12, and Willie Galick with 11. Daniels also had a game-high nine rebounds, while Vinnie McGhee dished out four assists.

The Gauchos built up the formidable lead with good shot selection and crisp passing on offense, while creating numerous Matador turnovers on defense. However, midway through the second half, the Matadors turned the tables on the Gauchos by utilizing a fullcourt press, causing numerous Gaucho turnovers while reducing the deficit to two points. James Powell closed the door on the rally by making key free throws as time expired.

The physical nature of the game caused both teams to play sloppy at times, as the Matadors committed 26 turnovers, and the Gauchos committing 24 of their own. A total of 28 personal fouls were called on the Matadors, with the Gauchos committing 27. But the win enabled the Gauchos to remain in first place in the Big West conference standings heading into Saturday's showdown with Cal Poly, San Luis Obispo. The game will be played at Mott Gym on February 27 at 7 pm.

Box Score
Posted by Gaucho Greg at 11:39 PM No comments:

Orlando Johnson won his second Big West Conference Men's Basketball Player of the Week honors after leading the Gauchos to a pair of victories over Cal. St.-Fullerton and Fresno State.

http://ucsbgauchos.cstv.com/sports/m-baskbl/spec-rel/022210aab.html
Posted by Gaucho Greg at 3:02 PM No comments:

This is video footage of the 2nd half action (part 2) of the ESPN Bracket Buster game between the Gauchos and Bulldogs at the Save Mart Center in Fresno, CA.


http://www.youtube.com/watch?v=oHjG1peEx88
Posted by Gaucho Greg at 9:02 AM No comments:

This is video footage of the 2nd half action of the ESPN Bracket Buster game between the Gauchos and Bulldogs at the Save Mart Center in Fresno, CA.

Gaucho hoopsters JP, JJ, OJ, and Nunnz chillin' after a victory over Fresno State in the ESPN Bracket Buster series. Click on photos to enlarge. 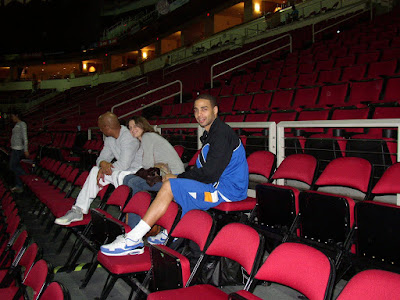 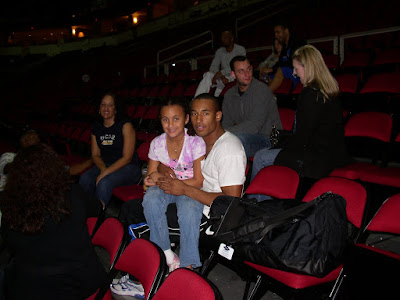 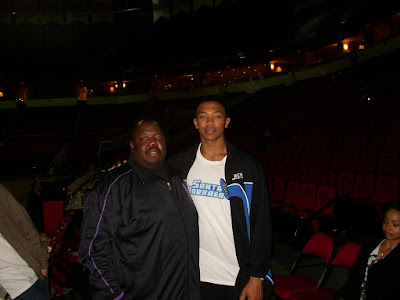 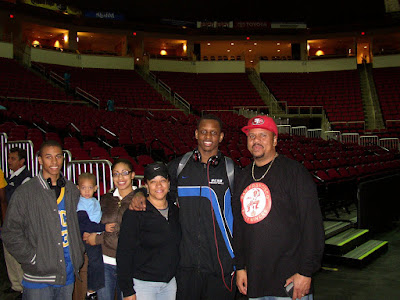 Posted by Gaucho Greg at 6:31 PM No comments: 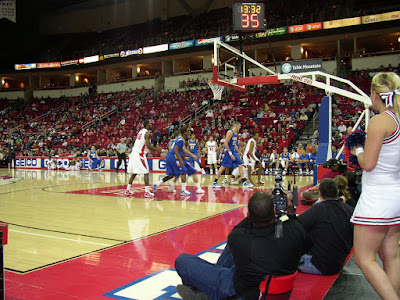 Box Score
Posted by Gaucho Greg at 3:19 PM No comments:

The UCSB Men's basketball team completed a regular season sweep of Cal. State, Fullerton by winning in Titan Gym 73 - 65. The Gauchos (15 - 8, 10 - 3) remained in first place in the Big West Conference, one-half game ahead of UOP, who also won over Long Beach State 74 - 52 yesterday.

But the shot that turned the tide for the Gauchos may have been Justin Joyner's 3-point basket late in the second half, his first points of the season. It was indicative of Joyner's increased playing time and comfort level after returning from a redshirt year due to a broken wrist, delayed further by a severely sprained ankle. The Gauchos executed their halfcourt offense well, finished on fast break opportunities, while still applying their suffocating defense on the perimeter.

The Titans (13 - 12, 7 - 6) were led by the trio of Gerard Anderson, Aaron Thompson, and Orane Chin with 14 points each. Jer'Vaughn Johnson and Thompson led the Titans with 11 and 10 rebounds, respectively, while Jacques Streeter handed out five assists.

The Gauchos continue their road trip by playing Fresno State Saturday, February 20 at 7:30 pm. The match up is part of ESPN's Bracket Buster series.

Box Score
Posted by Gaucho Greg at 1:08 PM No comments:

The UCSB Men's basketball team retained first place in the Big West Conference regular season race by edging Long Beach State 64 - 62 in the Thunderdome. The Gauchos (14 - 8, 9 - 3) were led by Jaime Serna's season-high 17 points and Will Brew's 12 points, all in the first half. Orlando Johnson chipped in 11 points, but more importantly, he assisted on eight Gaucho baskets. James Nunnally led the Gauchos with seven rebounds, followed by Greg Somogyi with six boards. Somogyi led a stingy Gaucho defense with five blocked shots, and altered many more in the paint.

The 49ers (12 - 13, 6 - 6) were led by Stephan Gilling's 17 points, including five 3-point baskets. TJ Robinson and Casper Ware had 12 points each, with Robinson pulling down a game-high 15 rebounds, and Ware dishing out six assists.

The tightly-contested game had five ties and seven lead changes, and came down to the final possession. Ware committed a turnover driving the lane, and Nunnally recovered the ball as time expired.

Former Gaucho great Brian Shaw was honored as a "Legend of the Dome" in absentia before the game.

The Gauchos travel to Cal. State, Fullerton to take on the Titans on Wednesday, February 17 for a 7 pm game.
Posted by Gaucho Greg at 1:41 AM No comments:

Brian Shaw to be honored as "Legend of the Dome"

Brian Shaw, former basktball Gaucho great from 1986 - 1988, will be honored as a "Legend of the Dome" in the Thunderdome at halftime of a Big West Conference match up between UCSB and the Long Beach State 49ers. Game time is 4 pm, Saturday, February 13.

The UCSB Men's basketball team hung on to defeat UC-Davis 81 - 77 to complete a regular season sweep of the Aggies. The Gauchos (13 - 8, 8 - 3) capitalized on a torrid shooting night, making 11-of-17 3-point shots, including their first seven. James Nunnally led the Gauchos with 24 points and six rebounds, while adding four assists. Orlando Johnson added 15 points, while Jordan Weiner and Will Brew chipped in 11 points each. Justin Joyner dished out eight assists while Johnson had 3 blocked shots.

Despite UCSB's hot shooting, the Aggies (9 - 13, 5 - 5) managed to close the final gap to four points after trailing by 19 points (72 - 53) with 3:39 minutes left in the game. Dominic Calegari led the Aggies with 20 points, followed by Joe Harden with 19 and Mark Payne with 18. Harden also led the Aggies with 12 rebounds and seven assists.

UCSB hosts the Long Beach State 49ers on Saturday, February 13 at the Thunderdome. Game time is 4 pm and will be broadcast by Fox Sports Prime Ticket.

UCSB will also unveil the second men's basketball "Legends of the Dome" at halftime.

Box Score
Posted by Gaucho Greg at 2:00 AM No comments:

The UCSB Men's basketball team completed a regular season sweep of first-place University of Pacific by beating the Tigers 61 - 48 at the Alex G. Spanos Center. Orlando Johnson had a career-high 28 points in leading the second-place Gauchos (12 - 8, 7 - 3) past the Tigers (14 - 7, 7 - 2). James Nunnally added 19 points, while sharing the rebounding lead with Johnson and Jaime Serna with six each. Johnson also led the Gaucho defense with three steals, and it was on defense that the Gauchos shined.

The Gauchos limited UOP's offense to shooting 29.4% from the field, and 22.2% behind the 3 point line. Allen Huddleston was the only Tiger in double figures with 10 points, while Sam Willard had 7 rebounds and 3 steals to lead the Tigers in those categories.

Box Score
Posted by Gaucho Greg at 12:21 AM No comments: