Posted by Gaucho Greg at 1:30 AM No comments:

Posted by Gaucho Greg at 8:04 AM No comments:

http://instagram.com/p/v-ZX8CMMUs/
Posted by Gaucho Greg at 5:34 AM No comments: 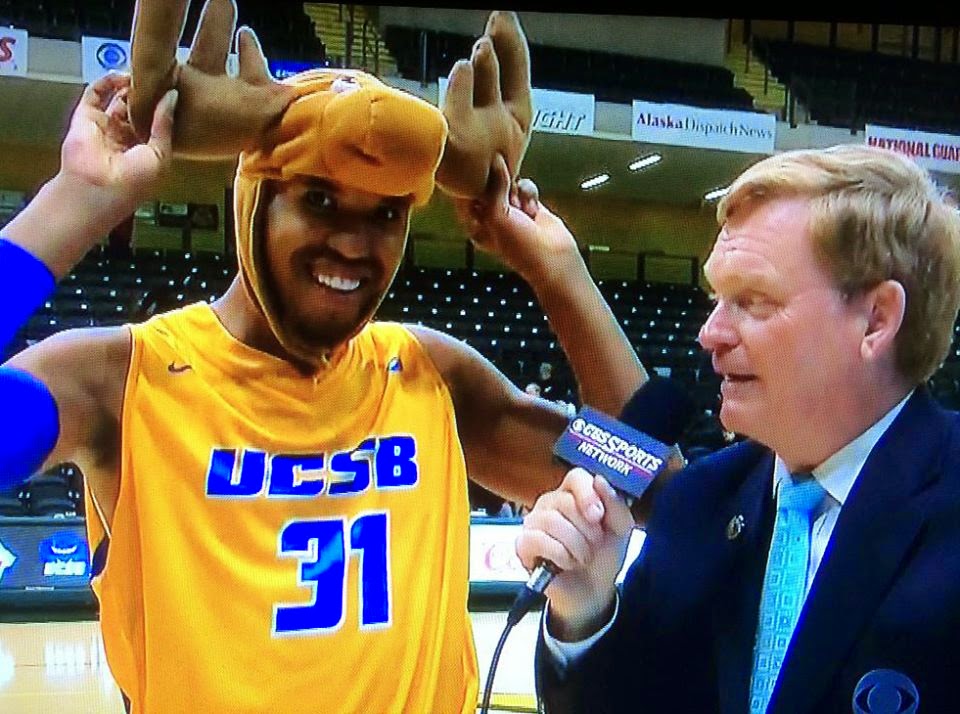 Posted by Gaucho Greg at 5:05 PM No comments:

Posted by Gaucho Greg at 5:03 PM No comments:

Box Score
Posted by Gaucho Greg at 1:23 AM No comments: 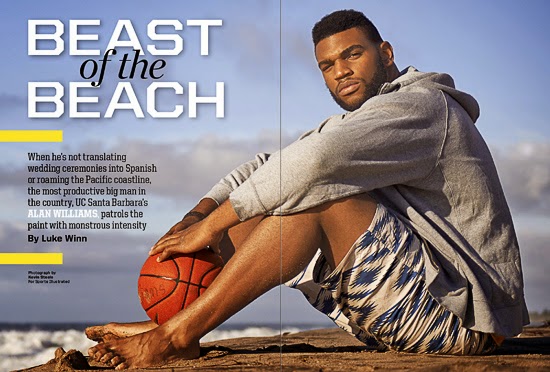 
http://youtu.be/_onJGSnBRRU
Posted by Gaucho Greg at 11:05 AM No comments:

Posted by Gaucho Greg at 7:50 PM No comments: 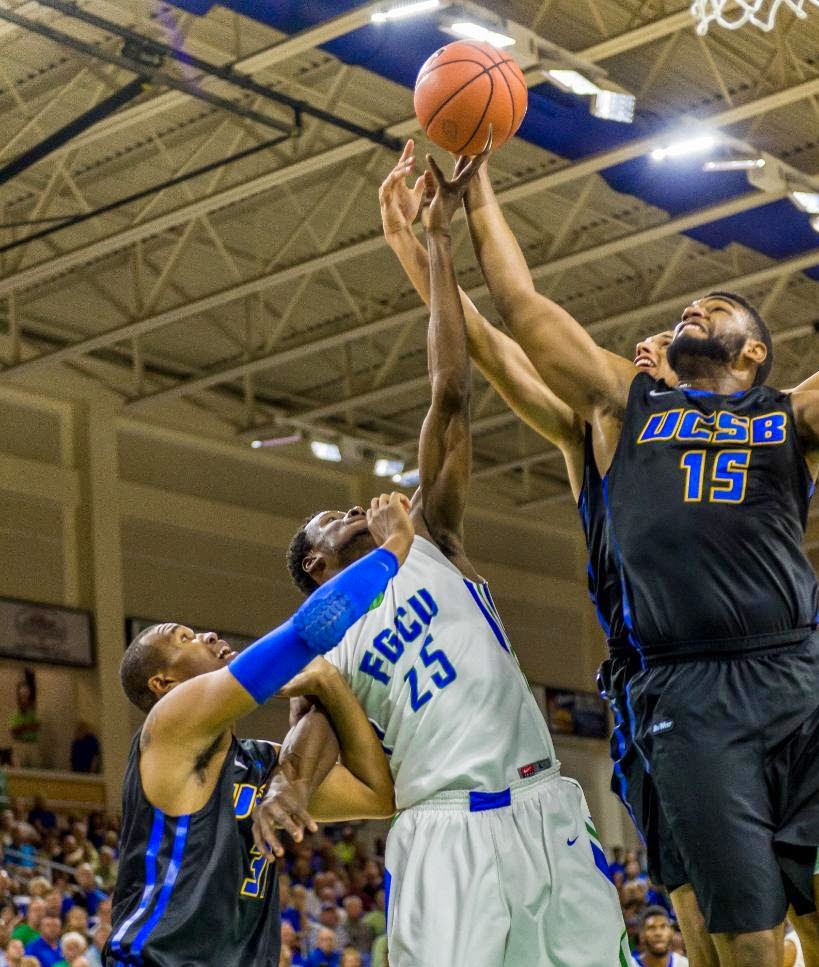 Posted by Gaucho Greg at 9:05 PM No comments:


#5 Kansas defeats plucky UC-Santa Barbara team by 10 at Phog Allen Fieldhouse
In a physical, ugly game, Kansas came away with a 69-59 win against a tough mid-major in UC-Santa Barbara. The Jayhawks got a well-rounded performance with five guys scoring between 14 and nine points. They probably would have liked to see a stronger performance though, given that their next matchup is Kentucky on Tuesday. UCSB's 2-3 zone forced Bill Self's team into 16 turnovers, and repeated failed defensive rotations led to open Gaucho looks. Alan Williams of UCSB was a dominant force inside as usual, scoring 22 points and adding 13 rebounds with four blocks, but the Kansas bigs availed themselves well in making life extremely difficult for him. UCSB faces a pretty tough schedule with five high-major out-of-conference opponents, but it wouldn't surprise me to see them pull an upset or two based on their performance tonight.

Posted by Gaucho Greg at 6:06 PM No comments:

No. 5 Kansas 69, UC-Santa Barbara 59
No Andrew Wiggins, no Joel Embiid, no problem, right? Even without two of the top three picks in last June’s NBA draft, the Jayhawks are expected to be the class of the Big 12 yet again, thanks partly to another strong freshmen class that includes forward Cliff Alexander and guard Kelly Oubre. But those two combined for just nine points (all by Alexander) and 16 minutes (12 by Alexander) on Friday, leaving Perry Ellis to remind everyone that he might just be the best player in the conference. The efficient 6-8 junior forward had 13 points (while taking just seven shots from the floor) and 10 rebounds to help offset the first of what could be many long nights from outside for KU (2-of-10 from 3-point range).

The best player on the court, however, was Alan Williams. The Gauchos’ 6-8 senior center flew under the radar last year despite averaging a double-double (21.5 points, 11.3 rebounds) and he was right on those averages against the Jayhawks (22 points, 13 rebounds). This was the highest-profile game on UCSB’s schedule this season, but try to catch Williams later this year, maybe on Dec. 8 against No. 22 SMU or Dec. 22 at Oregon, so you know what you’re talking about when people start discussing him as a first-team All-America come the new year.

Posted by Gaucho Greg at 6:03 PM No comments:

Williams, Gauchos Battle Hard Before Falling at No. 5 Kansas, 69-59

Box Score
Posted by Gaucho Greg at 9:55 PM No comments:

Gauchos Travel to the Heartland, Open Season at No. 5 Kansas Friday

Posted by Gaucho Greg at 3:43 PM No comments:

Box Score
Posted by Gaucho Greg at 6:34 AM No comments:


After a strong sophomore season, Alan Williams turned the corner in a big way as a junior. Williams averaged 21.3 points and 11.5 rebounds per game on his way to being named Big West Player of the Year. He also looked good in early season contests against UCLA, California, and UNLV, performances that undoubtedly caught scouts' eyes. Already one of the country's most productive big men and an NBA prospect in his own right, the question is now whether Williams can lead UC Santa Barbara back to their first NCAA Tournament appearance since 2011, while showing scouts he is more than merely an ultra-productive big man against weak competition.

At 6'8 with a 7'1.5 wingspan and a massive 264-pound frame, Williams is undersized for the center position. Additionally, he is not a great athlete, either, lacking ideal quickness and explosiveness, even though he is fairly nimble offensively for his size. Perhaps the biggest issue is his conditioning, as he still visibly struggles to get up and down the court at times. Additionally and while he has already lost weight since his freshman season, he must continue to slim down in order to maximize his physical tools.

Beyond his conditioning issues, Williams has a good reason to look tired at times, as he is one of the highest usage players in our database, responsible for 28.7% of UC Santa Barbara's overall possessions. Many of the Gauchos' possessions begin and end with Williams, and he has made significant strides between his sophomore and junior seasons. Most notably, his 27.6 points per 40 minutes pace adjusted ranked fourth among prospects in our database last season, with two of the players ahead of him eventually being drafted in the lottery.

On film, Williams is a crafty scorer who does an outstanding job of fighting for and carving out space on the low block. He shows the perfect combination of soft hands, footwork, and timing, as he rarely hesitates before going to work once he has the ball in his hands. Williams' post game is not particularly advanced, but he is able to leverage his strength and spin moves into space, and shows a solid baby hook shot with his right hand. He does not have the most advanced counter moves, but he can occasionally get his man in the air with a head fake or simply clear his way to the basket thanks to his superior strength if a play breaks down. He can also take his man off of the dribble from the perimeter, mostly with straight-line drives to the basket.

There is a positive and negative to Williams's aggressive productivity. On the one hand, he was one of college basketball's most productive players and his 10.1 free throw attempts per 40 minutes pace adjusted, which ranks third among centers in our database. On the other hand, his 52% 2P% is not extraordinary considering the level of competition he faces on a nightly basis. He tends to develop tunnel vision, fighting through traffic to the basket or settling for a high-difficulty, low percentage looks. There are major concerns about how Williams' lack of size and athleticism will translate to the NBA, where he won't be able to simply bully his way through opponents the way he does at the college level.

One area of intrigue remains Williams's potential as a jump shooter, particularly from mid-range where he made 44.4% of his 18 attempts. He does not have the greatest mechanics, as he tends to push the ball with a slow windup and quick release. Improving here is essential to his NBA prospects as a senior. He showed an occasional flash of a mid-range game, taking a dribble into a pull up jumper, but he will have to make significant strides in this area before it becomes a regular feature of his game.

On the defensive end of the floor, Williams struggles in the areas that one would expect, looking a step slow when his man takes him outside or drives the basket and failing to close out quickly on perimeter shooters. That being said, his 3.2 blocks and 1.4 steals per 40 minutes pace adjusted show just how effective his combination of length, strength and terrific instincts are at this level, particularly as a post defender. His conditioning woes are apparent on this end of the floor, however, as sometimes his effort simply isn't there. Perhaps most concerning is the fact that he is largely post bound, clearly a undersized center on this end of the floor, and showed little ability to guard the pick-and-roll, which will be essential to his prospects at the next level.

That being said, he is an outstanding rebounder and his 14.8 rebounds per 50 minutes pace adjusted ranked fifth among all prospects in our database. Williams has amazing instincts on this end of the floor, showing the perfect combination of positioning, soft hands, and aggressiveness in corralling missed shots on the defensive end.

Scouts know that Alan Williams is one of the most productive players in college basketball. What Williams must prove is that some of that productivity will translate to a role at the next level by developing as a scorer out of the pick-and-roll and as a jump shooter. Likewise, given the fact that he will most likely need to transition to the power forward position at the next level, he must show scouts that he can compensate for his lack of size with hustle, particularly on the defensive end. That makes early season contests at Kansas, Oregon, SMU and Oregon State all the more important, as besides his highly entertaining matchups with Mamadou Ndiaye, Big West competition offers scouts little insight into how Williams' skill set will translate to the next level. Williams is on already on the 2015 NBA Draft radar, so a strong senior season will go a long way in boosting his stock and keeping his name in the conversation come June.

Posted by Gaucho Greg at 2:24 PM No comments:


This year's eight-team field includes 2014 NCAA tournament surprise Mercer, but the matchup we're hoping to get in the final is Mountain West hopeful Colorado State against the Big West's UC-Santa Barbara. This might not seem worth staying up past midnight for holiday hoops, but that means you're not aware of UCSB double-double monster Alan Williams.

Williams, a 6'8", 265-pound senior power forward, averaged 21.3 points and a Division I-leading 11.3 rebounds last season while recording 16 double-doubles. His first game in the tourney, against Washington State at midnight ET on Thanksgiving night, will serve as a perfect holiday nightcap.

Posted by Gaucho Greg at 5:41 AM No comments:


The Big West star isn't recognized nationally, because he plays in a conference that rarely is spotlighted before the push for late-season automatic bids begins. But his 16 double-doubles (No. 10 in the country) and his No. 20 ranking in offensive rebounding rate per Ken Pomeroy suggests he has earned this slot.

Posted by Gaucho Greg at 9:25 PM No comments:

http://bleacherreport.com/articles/2230923-predicting-the-top-double-double-machines-in-the-2014-15-ncaa-basketball-season/page/22
Posted by Gaucho Greg at 4:13 PM No comments:

@Gauchohoops Mitch Brewe has expanded his game as the most improved returnee. And Gabe Vincent is looking impressive so far as a freshman
— Bob in Paradise (@SBBobinParadise) October 29, 2014

Posted by Gaucho Greg at 1:38 PM No comments:

"We are the best that we've ever been at the point guard position since I've been here." - Bob
— Bob in Paradise (@SBBobinParadise) October 29, 2014

Posted by Gaucho Greg at 1:36 PM No comments: