Thanks Coach Holland and good luck in Carlsbad!
Posted by Gaucho Greg at 3:04 PM No comments:

This is a baseball video, but watch the hops on this kid. He should be playing basketball!

See sidebar for updates on the scholarship grid.
Posted by Gaucho Greg at 5:48 PM No comments:

http://ucsbgauchos.cstv.com/sports/m-baskbl/spec-rel/041510aaa.html
Posted by Gaucho Greg at 1:22 AM No comments:

http://www.youtube.com/watch?v=UQlQ5YWOz_s
Posted by Gaucho Greg at 10:10 AM No comments:

http://www.youtube.com/watch?v=tJzzolpol1Q
Posted by Gaucho Greg at 11:52 PM No comments:

This isn't Gauchos hoops-related, but it's received a lot of "run" as our own Gaucho alum Jim Rome would put it. The video has received a healthy dose of clicks on the Sports Illustrated website.

Come out and see the Gauchos play the CSF Titans Saturday at Caesar Uyesaka Stadium at 1 pm--and get some free Gunnar shades!
Posted by Gaucho Greg at 6:55 PM No comments:

Exciting offensive plays often make the highlight reels, but occasionally, a stunning defensive play can be equally captivating. James Nunnally is captured here defying gravity in turning back a surefire bucket by a CSUN player.

Posted by Gaucho Greg at 2:43 AM No comments:

The Gaucho coaching staff will have discussions about possible transfers with some of these players.

http://community.foxsports.com/goodmanonfox/blog/2010/04/14/first_edition_of_end-of-year_transfer_list
Posted by Gaucho Greg at 2:01 AM No comments:

Catching up with Coach Bob Williams

Gaucho Hoops caught up with Coach Bob Williams in an exclusive interview about the Gauchos basketball team's offseason.

Gaucho Hoops (GH): Thanks for taking the call, Coach. How was the NCAA Final Four?

Coach Bob Williams (BW): It was a great experience. Indianapolis is a great town, and is a great venue for a college basketball championship. It was a first-class event.

GH: Cool...glad to hear about the Final Four. I know you're busy--let's get right to it. What is the schedule for the team's summer workouts (conditioning drills)?

BW: All players are expected to undergo mandatory strength and conditioning training during August and September, 3 - 4 days a week. Jeremy Bettle, Director of Sports Performance, will oversee their conditioning program.

They will have the month of July off with most players going home for the summer.

In June, some players will be working part-time, including at UCSB basketball summer camps.

The coaching staff will be away from campus in July recruiting prospects.

GH: Which players are playing in summer leagues?

BW: Greg Somogyi will play in Hungary again for approximately 3 weeks, but he realizes his time at UCSB will be important for his strength development. The pro-am leagues in San Francisco and Los Angeles run into the month of August, and with players expected to be on campus in August, there are scheduling conflicts. But summer leagues can be beneficial for player development.

GH: What are the redshirt possibilities?

BW: The possibility of Somogyi redshirting is highly unlikely at this point in time, as his improvement has been drastic, and as he gets stronger physically and developmentally. Redshirting decisions are premature at this point, and will be made as the season approaches, after fall practice.

GH: Any comments on the incoming recruits?

GH: Any comments on additional 2010 recruits?

BW: Any 2010 recruits will be the best players available, not necessarily position-specific.

BW: With many returnees, the 2010 - 2011 team will be similar, but physically stronger, including the front court. Replacing James Powell's clutch shooting and Paul Roemer's gritty defense will be tough, as both seniors played important roles during the stretch run through the Big West championship (despite Roemer's earlier injury). Other back court players will fill in the gaps next season.

GH: How is scheduling going for the upcoming season?

BW: The staff will add a few more games to the schedule, with notable games including Fresno State (return bracket buster game) and Portland. Unfortunately, a few potential opponents have dropped UCSB from their schedules presumably due to the Gauchos' solid play and youth.

GH: Any additional comments on the upcoming season?

BW: The coaches are excited about the future, and the players are motivated to get stronger and better.

GH: Thanks Coach, for your time, and good luck with the team.

BW: Thanks, I appreciate you're doing this.
Posted by Gaucho Greg at 12:28 AM No comments: 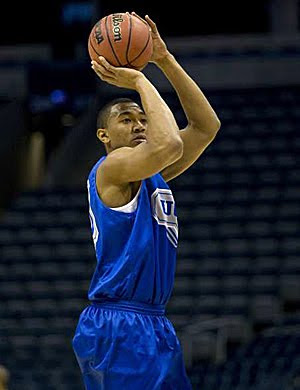 http://ucsbgauchos.cstv.com/sports/m-baskbl/spec-rel/040310aab.html
Posted by Gaucho Greg at 11:37 AM No comments:

http://www.youtube.com/watch?v=sa_xGRUjgmk
Posted by Gaucho Greg at 8:20 PM No comments:

http://www.youtube.com/watch?v=OWBRn6ViWnU
Posted by Gaucho Greg at 9:15 PM No comments: