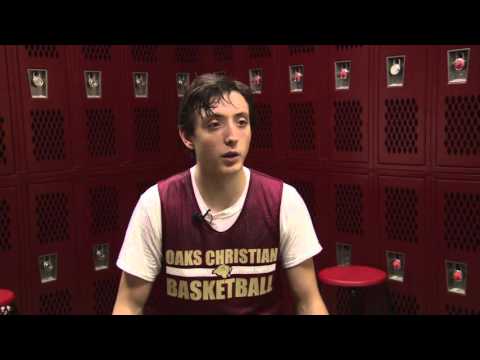 Gaucho Hoops ("GH"):  Thanks for taking this interview Coach Andrade.  I just wanted to get a few quotes from you regarding your former player Max Heidegger, incoming freshman at UCSB.  First off, Max looks like he is a scoring point guard, based on videos.  Is he a good passer, too?

Julian Andrade ("JA"):  Yes, Max has great court vision, and is a good passer, and can score in a variety of ways.

GH:  What will he need to work on at the next level (Division 1 college basketball)?

JA:  Max will need to focus on playing defense.  We didn't ask him to expend too much energy on defense because we asked so much of him on offense, but he realizes he'll need to buy in on defense, because at the next level, on any given night, your opponent can score 20 points on you if you take any possessions off.  He will need to consistently bring it every game.

GH:  What characteristics does he possess that make you believe he can play defense at the next level?

JA:  Max is athletic--he can jump, he's quick, and has a quick first step--he's explosive.  He understands team defense, not just individual defense.  But he will need to put in work on defense at the college level.

GH:  How tall is Max, and how much does he weigh?

JA:  Max is 6'2" and 175 pounds.  Last season, he had mononucleosis, a sinus infection which affected his breathing, and had back issues previously.  During the playoffs, he had the flu, so he was never 100% healthy for his senior year.  Yet, he still averaged 30 points per game against good competition (Marmonte League).

GH:  He looks skinny.  UCSB will put him on a weight program.

GH:  What separates Max from other players?

JA:  Max has the ability to create his own shot.  He doesn't need an offense to be designed for him.  He also has this competitive fire you can't teach.  He raises his level of play to the competition.  He plays best against the best opponents.  He will have to adjust to bigger and better athletes in college, but then again, he won't be double- and triple-teamed like he was in high school, because he was so dominant.

JA:  Well, in high school, he had the ball in his hands often, so he was a point guard, but he is kind of a combination guard.  He can handle the ball, pass it, but he is also a prolific scorer.  He can play the 1 or the 2.  And he has a lot of flair in his game.

JA:  He has great character, he's a good teammate, and he's very coachable.  He's not a vocal leader on the court, but leads by example.  He's very tough, and has played through injuries.  And he's very competitive.

GH:  Coach, what counsel did you give Max during the recruiting process?

JA:  None whatsoever.  He is very mature, and knows what he wants.  He made his own decision.   PAC-12 schools were recruiting him his sophomore year, but after he hurt his back, he sort of fell off the recruiting radar.  UCSB stayed on him.

GH:  From interviews I saw, he loved Santa Barbara, and felt that it was a good fit.

GH:  Thanks Coach, and good luck at Chaminade.

JA:  Any time.  See you up in Santa Barbara at the games.
Posted by Gaucho Greg at 1:42 PM