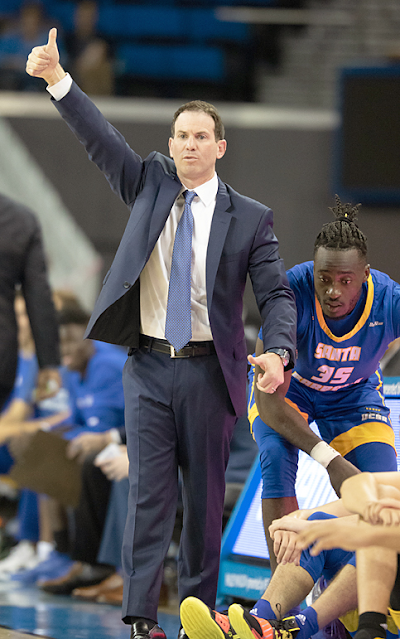 Gaucho Hoops ("GH"):  Thanks for taking this interview, Coach.  Give us an update on the state of the team.
Joe Pasternack ("JP"):  For us, we're getting better defensively.  We had a lack of continuity due to injuries.  We haven't had a full squad since the first UCSD game.  Calvin sprained an ankle, Robinson had a concussion in the second half of the UCI game.  Ajare injured his ankle.
Everybody has had to step up.  We are getting better in the Ken Pomeroy defensive statistics.  We need to improve our rebounding.  How good can we get by the end of February will be determined by our improvement on defense.  Can we control and limit opponents to one shot?  Can we limit our turnovers to fewer than 10?  We have different guards who are new to our system.  One possession could change the outcome of a game.
At Hawaii, one missed assignment cost us the game.
At Long Beach, we let them get one offensive rebound.
Against UCI, there were many plays that could have gone either way.  It was very, very close.
Ajare was out last week and second half of the UH game.  He's a leader on this team, and can hopefully return soon.  His availability is day to day, and he's working hard with the physical therapist.
GH:  Miles has been great at times, but inconsistent at times.
JP:  Miles Norris is working with a sports psychologists who works with NBA players.  The psychologist works with all our guys.  Miles' success can't be dependent on whether he makes his shot or not.  Miles is such a great kid.  He just needs to lock down and concentrate.  He should be more consistent going forward.  Two of his last 4 have been 30-point games.  His defense on Rocak is what he's proud of,  He's more mature, he's hungry and getting better each game.  He's a high character kid, who's very coachable.
Amadou Sow--all his numbers are up for the past few games.  He was banged up against UH and a few games before that.  He's fully healthy now and playing better.
JPL is more under control.  He can't go 100 miles an hour.  His 50 MPH is faster than other human's 100 MPH.  He changes pace better and is slowing down and then blowing by defenders.  He's letting the game come to him.  His ball pressure on defense changed the game for him.  His starting role is  new to him; he has a new seat on the bus.  Last year we had 3-year starters.  It takes time to get used to a different seat on the bus, whether you're the owner or a manager, or the President or a Vice President.  JPL is becoming more accustomed to the seat on bus.  JaQuori's senior  year was different than his junior and sophomore seasons.  They are all gaining experience as the season progresses, which is  important as we move forward into March.
Calvin was out all last year, as he had a serious hip surgery.  He practiced for 1 month and was shut down 6 months.  Such a big layoff got him out of rhythm.  This year he was out with a sprained ankle for 3 weeks without practice.  He's healthy now.  He will play his best going forward.
Ajay reminds me of a JaQuori--although he is even further along as a freshman than JaQuori was.  He will be spectacular.  He's just a (true) freshman with ups and downs.  We decided to invest in Ajay as a freshman, knowing we'd have him for four years.  I inserted him in the Arlington game, his first game with a lot of experience so he can be ready for March.  He's a 6'5" point guard who leads the Big West in assists and assist/turnover ratio.
I'm really optimistic about the future of this season.  We were lucky--we had no injuries or Covid last year.  This year we've had Covid and injuries.  But we keep improving and we're getting everybody back, so we're optimistic we can finish off season on a high note.  There were some practices where we only had 7 players and one coach (Pasternack).  Inconsistency has been a problem.
We had four home games cancelled.  It's hard to win on the road in college basketball.  Other teams also had Covid.
We also are missing Zach Harvey who hasn't played at all.  He had  ankle surgery.  We expect him to be a huge impact player next season.
GH:  Thanks Coach!
Posted by Gaucho Greg at 1:23 AM