Interview with Coach Pasternack on 2022 Offseason

Joe Pasternack ("JP"):  Yeah, I think the returning guys...I'm really excited about our roster.  I think the biggest difference between last year and the year before is we had Jaquori, Devearl and Brandon Cyrus--we had returning guys--3 year returning guys and a lot of depth.  And then this past year, we raised the expectations of the program, but we lost 3 guys and added 3 new guys.  We added Calvin Wishart who never played and never really practiced in our system.  He was hurt all year.  Ajay Mitchell was a true freshman.  And JPL was playing 10 minutes a game.  Zach Harvey was supposed to play, but he got hurt and then he had season-ending surgery on his ankle and his knee.  So we never really had any returning players playing major minutes [in the backcourt].  And it took us a while to figure it out.  And then we had COVID break out.  Games got cancelled.  We were really in an inconsistent mode in the nonconference season trying to get to know each other.  And then in conference, we were 1-4 in the beginning of the conference season.  We didn't have enough players because of COVID.  It was a mess, and there were injuries.  We won 9 of our last 10.

Coming into this year, we have returning players.  Calvin, and Ajare, and Ajay Mitchell, and JPL, and Zach Harvey is coming off his injury.

GH:  Do you believe he will play once the season starts?

JP:  Yes, he's practicing this summer.  Cole Anderson was a [true] freshman last year.  We were playing true freshman, which doesn't happen often in college basketball.  We have alot of returning players that know the system, that know me, and know how we do things, our culture.  From the perimeter standpoint, we've got a lol of returning guys.  They're good players.

And then you go to the frontcourt, and Miles Norris is returning for his 5th season.  Ariel Bland was a true freshman last year.  He has alot of potential, but he was just a freshman.  He's good.

Koat Keat is 6'10", who's from South Sudan.  He's been in the States four years.  He's the only player on campus right now, attending summer session 1.  He's got a lot of talent and ability, and we're really excited about him, his future with our program.

Then we move to the frontcourt in the 5 position, and Andre Kelly, a transfer from Cal.  An absolute huge recruit for us.  One of the top recruits we've ever gotten.  3.3 GPA at Cal-Berkeley for four years, and he's coming here for grad school.  Was Honorable Mention all-PAC 12 player, can really score in the low post.  I think he can do other things as well.  We're excited about him,

Jakov Kukic has been really patient, hasn't played for 3 years.  And knows our system, and I think having him with his experience is great to have.  He didn't really get an opportunity, and it's hard to judge him on 30 seconds of playing time here and there.

We have a commitment from a kid from Serbia.  He's a 6'7" kid who has committed to us.  He'll be a freshman.  We've never seen him in person.  We've watched a lot of tape and he comes really highly recommended.  He's going to be special.

We have another commitment from a kid from Kenya.  We're really excited about him.

GH:  He'll be on scholarship too?

JP:  Yes, he will be.  We have 13 scholarship players.  Excited about all of them.  For us, and this summer, it's all about building a team.  We'll have four new players, added to the returning nine.  Four walk-ons returning:  Max Sheldon, Pickles, Henry Hartwell, and Gage Gomez.  So we're going to have 17 players on the roster.  That's a big roster of unbelievably high character individuals, that really have a big chip on their shoulder on how the season ended last year--that buzzer beater.  And I think if JPL hadn't gone down with an injury, I think we probably could have advanced, and would have advanced.  We just ran out of steam in that last Long Beach game.  But I'm really looking forward to this season.  They're a really good group of players, and every practice is competitive.  It's going to be unbelievably competitive with the depth that we have.

GH:  You said only one player is here this summer, the kid from South Sudan.  Are the others working out on their own?

JP:  Yes.  Everybody needs a break.  School ended two weeks ago, so we sent them home to get them out of here.  They'll come back on July 10th.  That's when everybody gets back.

GH:  And then you go through limited practices, right?

JP:  Scheduling...I think you all have to put things in perspective.  A lot of people think that it's me, that I don't want to play the teams.  Unfortunately, I don't get to pick the schedule.  Although it looks like I get to pick, I don't get to pick.  It's a 2-way street.  It's like when you get married, I don't get to pick who I want to marry necessarily.  She has to want to marry me, too.  And I don't get to pick the NBA.  They have to want to draft me.  Without question, it's a tireless effort of asking and being told "no no no no no".  And then hopefully, when teams get desperate in June, July, August, then they say "we'll play."  But I want to play great teams.  We've called Gonzaga.  They won't play us.  UCLA won't play us.  Their point is if we're going to buy a game for $80K - $100K, we don't want to look at our head coach and him saying "Why did you schedule this game?"  That's it.  And so we're trying everything to get to play these big-time schools and we're struggling.  It's the hardest part of our job here at UC-Santa Barbara.

GH:  One of the most unpleasant, I would imagine.

GH:  So Dom told me Amadou Sow is here working out.  That's a good statement for the program.

GH:  And you're helping them even though they're no longer with the program.

JP:  Of course.  They're family--it's forever.  That's a big thing.  When we first got here, we said it's not a 4 year decision, it's a 50 year decision.  We're going to help them get jobs.  Right now, Sekou Toure is not going to play pro basketball.  He wants to go into the working world.  And we need UCSB alumni to step up and get him a job.  He's looking for a job.  He's smart.  He's from Guinea, he speaks French.  If you want to help the program, hire Gaucho players.  My greatest satisfaction is when basketball is over, we're helping these guys get jobs with UCSB alumni for the rest of their lives.  That's my number 1 thing.

Right now, Marcus Jackson, our point guard our first year, a UCSB alum got him a job at Stifel in finance, on Wall Street.  He's there right now.

Leland King, we got him a job with a UCSB booster at UBS, in finance.  So what I'm working on is where can I get Sekou Toure a job.

GH:  That's great--that's really good to hear.  It helps in recruiting, I'm sure.  Anything else different this summer from others?

JP:  I don't think so. We're getting ready for recruiting.  We're getting on the road in July, and watching all the high school kids.  And you really have to make decisions.  Do you take the high school kid, or wait for the transfer?  It's a mix, and what we've done with this recruiting class is we have one juco transfer who has three years to play, one grad transfer who has one year to play, (we need somebody to take Amadou's spot).  And two high school kids that are both international, one from South Sudan, and one from Serbia.  So we have a really great mix of two high school, one juco transfer, and one grad transfer.  From America and from out of the country.

Editor's note:  Amadou Sow came into Coach's office just as I was leaving.  Apparently, it was his last day on campus, working at the Thunderdome.

Also, these are screen shots of buy games from SEC programs, who won't schedule UCSB. 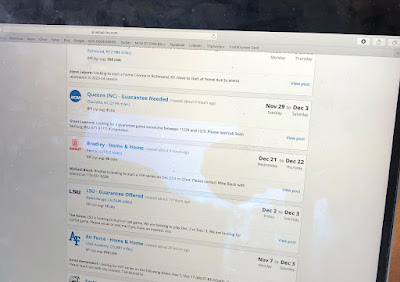