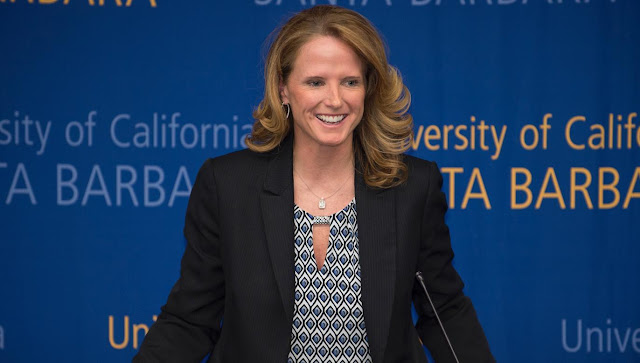 Gaucho Hoops ("GH"):  Thanks for taking this interview, Coach Henrickson.  First off, I wanted to mention that I was in attendance for last season's finale, the heart-breaking 71-67 loss to eventual Big West Conference Tournament runner-up, UC-Davis.   It looked like the Gauchos were about to get blown out by the Aggies, but the Lady Gauchos battled back and briefly took the lead before succumbing in the end.  It was one of the scrappiest efforts I've ever seen, and the team appeared so focused, determined, and fundamentally disciplined.

Coach Bonnie Henrickson ("BH"):  Thanks for that.  Yes, in the beginning of the year, the team was content with close losses.  We turned that complacency around and played not just to compete, but to win games.  The team really thought they could win that game.


GH:  With most teams, leaders emerge.  Who are the leaders on this team?

BH:  We have four captains which were voted in by the team:  two seniors and two juniors.  Mi'Chael Wright is a senior forward, Onome Jemerigbe is a senior point guard.  Drew Edelman is a redshirt junior forward, who transferred in from USC, and Chaya Durr is also a junior.  All four are very positive, and it's their responsibility to make sure each teammate is accountable.  They make sure we all check ourselves.  The captains are pretty vocal, and they also lead by example.


GH:  At Kansas, your recruiting base was nationwide.  How is recruiting different at UCSB?

BH:  Fortunately, the west coast has a deep talent pool, especially in California.  At KU, half of the time, we were recruiting in California, so our staff had previously established relationships with high school and club coaches.  That was a tremendous advantage.  UCSB has high academics, so we recruit smart players both on and off the court.  And yes, the location is nice and an easy sell, but the players who want to come to UCSB are also very competitive student-athletes.  That's why they come here.


GH:  I noticed that in the several players' bio's.  Several won academic honors in addition to their athletic achievements.

BH:  Yes, California is a #1 recruiting priority.  Even our out-of-state transfers are from California.

BH:  Onome has started at point guard for three years.  She is being pushed by Drea Toler, who redshirted last season after transferring from Oregon.  Onome is a real good on-ball defender, and can drive and kick it out.  She is working on her shot to keep opposing defenders honest.

Drea is a capable 3-point shooter,  and is very fast.  Her challenge is trying to slow things down.  She's a good on-ball defender, is good in transition, and incredibly unselfish.


GH:  That's an interesting point.  Coach Williams [men's basketball head coach] said the same thing about his incoming players.  They try to do too much too quickly, resulting in turnovers.  Slowing things down lets their athleticism take over.

BH:  Makala Roper, was an honorable mention all-Big West performer last season.  She shoots a high percentage from the the floor, and is our biggest 3-point threat.  She's often a catch-and-shoot 3-point shooter.  She is working on putting the ball on the floor, so she can get to the free throw line more often.

Coco Miller was consistent last year, which is remarkable for a freshman.  Sometimes, it's not about making a brilliant play, but more about not making bad plays.  She's smart, and plays within herself. She works hard, is a good defender, and understands positioning within our team defense.

Sarah Porter is a big  guard, who shoots the 3-point shot well.  We need her size on the glass.  She's the best kid in the weight room,  We're also working with her on putting the ball on the floor.

Aliceah Hernandez' ability to shoot the 3 point shot allows us to stretch the defense.  We also ask her to put the ball on the floor.  She's a smart kid.  We need her to defend and handle the ball better.

Tal Sahar will redshirt this season and will become eligible in 2017 after transferring in from Seattle.  She is a big guard with great length.  She can shoot it from deep, also.

Chaya Durr started all last year at the 4 position.  She is the most competitive player on the court, and gets the 50/50 balls.  She's a great defender and takes great shots--she shot 45% from the floor.  She's really athletic and finishes well.

Taylor Farris will only play the 4 this year.  She is a capable 3-point shooter.  She's long and lanky, and can dunk a tennis ball.  She can be a good defender, and has good foot work and good bounce.

Drew Edelman is physical and finishes well.  She's a great communicator, and was voted team captain in August, which shows you her leadership abilities.  She runs the floor well.

Je Zhe Newton is a former juco player who keeps getting better  She brings size to the position and finishes well around the rim.  She's been out for a week due to injury.

Natalia Bruening is a freshman who played both club volleyball and club basketball in high school.  Now that she is only focusing on basketball, she has really improved. She has a high ceiling.

Mi'Chael Wright is injured and may be out for the year.

Melissa Maragnes is coming back from an ACL and should return after the first of the year.


GH:  Overall, how would you characterize this year's team?

BH:  We're bigger inside this year.  We're playing well in practice.  Our depth has improved, so we are more competitive in practice this year.


GH:  Let's cover some questions from Gaucho Soul, a fan..
1) How was the transition from a bigger women's basketball program like Kansas to UCSB?  What was the most difficult and the best part of the move?

BH: Historically, UCSB women's basketball has been a successful program. It's a priority here. So it matters to me that they care about winning. We had to build trust in the players. As I said, while at KU, we were already recruiting California players, so that helped the transition.  With the storied history, and high academics at UCSB, we've been able to attract competitors on the court and in the classroom.


GH:
2)  What is the ultimate goal for UCSB and how high can this program go nationally?

BH:   Our goal is to win the Big West Conference regular season and Tournament championships.  Once in the NCAA playoffs, it's about match ups.  Our nonconference schedule is good preparation for league play.  The league is good.  Our goal is to go to the NCAA's and advance.


GH:
3)  UCSB's WBB program was once a dominant program under HC Mark French but struggled after his retirement.  How difficult was it to change the mentality of the players and how did you go about changing a program that went 2-27 before you were hired?

BH:  It's about winning, not just competing.  I got livid after we lost by a couple possessions earlier in the season because some players were satisfied that it was a close game even though we lost.  The players' mentality was that it was an improvement over the season before.  I had to instill the mentality that competing was not enough.  We were able to establish a winning culture.  We had to embrace playing the right way.

BH:   We need to get better and stay healthy.  We have to rebound better, and play better defense, and score more in transition.  We need to shoot the 3-point shot better.  We are hungrier this year, and the conversation is different, as expectations are higher.  Practices are much more competitive.


GH:
5)  More and more the WBB programs from the bigger conference are dominating the games and during March Madness with less and less upsets.  Do you feel that SB and other smaller program can catch up and what is the best path to accomplish that goal?

BH:  The power conferences have bigger, stronger, faster athletes.  The advent of the 3-point shot can neutralize size, athleticism, and speed. UCSB has a history of a Sweet 16 under Coach Mark French.


GH:  Thanks for sharing your team, Coach Henrickson.  Good luck this year, and see you at the games.