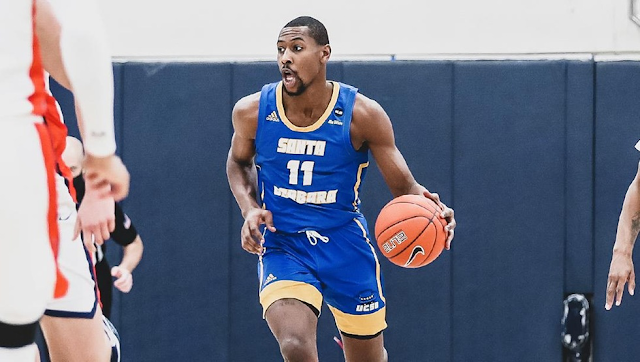 UCSB @ UCR, Friday, Feb 26 @ 8pm (ESPN); Saturday, Feb 27 @ 7pm The red-hot Gauchos, owners of a school record 12 game win streak, head to the inland empire for what may be their most difficult conference games of the year as the Highlanders have one of the best front courts in the west coast.  Earlier in the season, the Gaucho front court, in particular Amadou Sow, really struggled.  That has long been put behind him but at the same time the Gauchos have not played a team with a formidable front court since their two game sweep at the hands of Irvine.  UCR has shooters too, leading the conference in both 3 point makes and percentage (39%).   They are in 3rd place at 5-3, 10-6 overall and are coming off a surprising loss to UCSD.  In out-of-conference games they dismantled Washington by 15 and took USC to OT before losing by 5. While the Gauchos swept the series last year, in the last game between the two teams, UCR dominated in the paint and it was a blistering performance from behind the arc by McLaughlin and Ramsey (a combined 7/8) that secured a Gaucho victory.  The Gauchos hold a commanding 37-10 advantage in the series between the schools.  Riverside is coached by Mike Magpayo who got his degree from UCSB and is the first Asian American D1 men’s coach in the sport.   Roster UCR has a terrific frontcourt with PF Arinze Chidom and Center Jock Perry, a 7’1” transfer from St. Mary’s.  It could have been even more dominant if last year’s starting center, Callum McRae, had decided not to wait out the pandemic back in his home in New Zealand.  Sophomore PG Zyon Pullin has been terrific and is an all-conference 1st or 2nd team candidate. The Highlanders have rolled out the same starting line up every game this season.  Two of their five starters and three of the main four guys off the bench are from either Australia or New Zealand.  Welcome to St. Mary’s south.  Probable StartersGuard Zyon Pullin  #5  6’4”, 190 lb. Sophomore  11.8 ppg, 5.6 rpg, 4.3 apg, 2.4 ATO, 31 mpg, 43% from deepZyon has had a breakout sophomore campaign, nearly tripling his scoring average and providing a steady hand at point.  He’s a bit B-Shawesque with his good size for a point guard and his rebounding abilities. Guard Dominic Pickett  #22  6’3”, 210 lb. RS Junior 8.3 ppg, 45% from deep, 2.9 apg, 3.9 ATO, 30 mpg  The former walk-on provides another good ball handler and can light it up from deep.Guard Flynn Cameron  #11  6’5”, 210 lb. Junior 8.5 ppg, 5.8 rpg 34% from deep, 28 mpg Team’s leading rebounder.  From New Zealand and started his college career at DePaul, he was a teammate of Brandon Cyrus his freshman year as a Blue Demon but did not play.Forward Arinze Chidom   #1  6’9”, 240 lb RS Senior  13.6 ppg, 5.6 rpg, 39% three point shooter. 25 mpg Leads team in scoring, blocks and in getting to the line, 2.4 attempts per game but makes just 56% from the stripe.  Is prone to turning the ball over, 2.5 per game.  Started his college career at Washington St.  Had a terrific game against UCSB his last time out.Center Jock Perry  #25  7’1”, 250 lb, RS Senior 11.1 ppg, 4.8 rpg  26 mpg, 42% from deep.An Aussie, transfer from St. Mary’s.  He’s had some big games vs. Washington, UCI and USC but was quiet in their last two vs. UCSD.  He is a stretch 5, not afraid to shoot the three and has taken as many as 7 in a game this year. Key ReservesWing Wil Tattersall   #14  6’7”, 210 lb Freshman 7.8 ppg, 22 mpg, 45% from deep.From Australia, Wil is the Highlander’s leading three point threat, nearly all his attempts come from behind the arc. Guard George Willborn  #35  6’3”, 195 lb. 4.9 ppg, 13 mpg.  Went 4/5 from deep in the Highlanders loss to UCSDForward Oliver Hayes-Brown  #10  6’10”, 245 lb, RS Freshman, 3.3 ppg, 3.6 rpg  12 mpg.Another Aussie.Center Angus McWilliam  #23  6’10”, 240 lb, RS Junior 13 mpgAnother Kiwi, started his college career at TCU.. Matchups to watch:   Amadou and Idehen have not had to chase a center out to the paint much this season and Perry/Chidom will force them to do so. If I am Pasternack, I would consider having Norris guard Jock Perry and match up Sow with the powerful Chidom.  Keeping their guards from crashing the boards when our front court players are out chasing on the perimeter also key.  We may see more Kukic this game to handle the Highlanders size. The Gauchos are playing at such a high level right now that even in this series, which most of us have projected, along with the UCI series, to be the most difficult in conference play, its hard to pick against the Gauchos. I predict a split is most likely but a sweep of the Highlanders would not surprise.