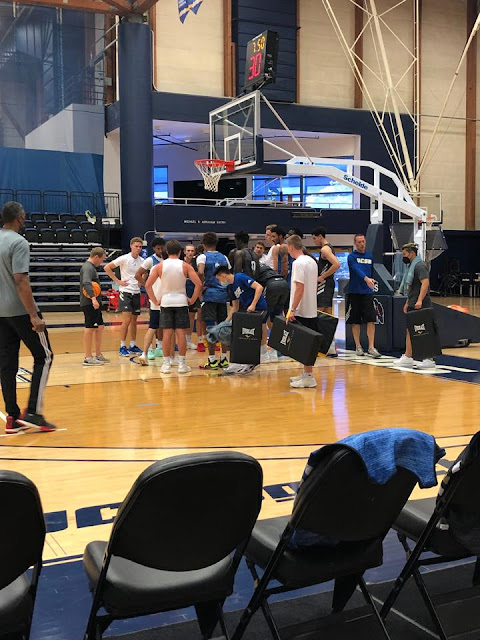 These are contemporaneous observations I texted to Gaucho fans during their first official preseason practice on September 30, 2021.

JPL is fast and springy.

Ajay Mitchell is bigger and stronger than Ajare Sanni.  Sanni still has that sweep jumper.

David Pickles is bigger and more athletic than his older brother.

The walkons are athletic.  Crazy.

Sekou Toure is practicing, although he is sitting out some drills.

Comparisons to Destin Barnes and Zach Harvey are unwarranted.  Harvey is more talented offensively and athletic.

JPL is learning the 2 position as well.

We're missing a lot of free throws on the first break.  Better on later breaks.

I love how the staff coaches up the walkons just as hard as the starters.  No one gets the superstar treatment.

In 2 on 2 drills, Wishart is on JPL.  They're going hard at each other.

Sanni is not doing full half court defensive drills?

Drill:  before 10 seconds on shot clock, no switch on defense.  At 10 seconds, switch.

Ariel Bland is athletic, but freshman-tentative.

Redshirt decisions made in November.

Robinson Idehen is very vocal.  Just got a steal.

Cole Anderson drives into middle of lane, pulls up for 10 footer.  Bucket.  Twice.

There is very little drop off from starters and 2nd team of Mitchell, Harvey and Anderson.  Athletically, no drop off at all, with the exception of JPL, who's athleticism is off the charts.  Coach Pasternack says JPL is the most athletic player he's ever coached, including at Cal and Arizona.

Mitchell goes into the sidelines with a save.  You're going to love Mitchell.

If we lose 4 games I'd be surprised.  Damn.  Can't believe I said that.

Looked at a couple unnamed boosters.  We just nodded at each other.  We're good.  At least we should be as the season progresses.  The talent is there.

Washington State, St. Mary's, UCI.  Who else?  This team is different.

Some of our walkons start on Bob's teams.

We have high major depth.

We have more talent than last year, in my opinion.

Mitchell has game.  Needs to finish and shot is not stable yet.

JPL can turn a corner even when covered.  He's leans in to create a driving lane.

Wishart hits top of the key 3.

Players get along with each other and even team managers.  Good chemistry.

Harvey strong arms against double team, including Idehen.  And 1.

JPL scores the other way.  In 8 seconds.

Sanni gets bloody nose from an inadvertent elbow.  Stuffs in bandage.  Back at it.  lol

JPL finds Robinson.  Turns it over.

JPL turnover.  Bland steals.  Tomahawk dunk.  Wow.  Bland is third string and he just did that.

Harvey is warming up.

Harvey will be in the rotation.

Sow playing some at the 4.  Adding perimeter shot.  He will play with Idehen and Kukic at the 5 sometimes.

Anderson is not just a 3 point shooter.   He has a midrange jumper too.

I enjoy watching this.  D'Antonio offense?

Coach Pasternack is not yelling as much on screw ups.

I've never seen this pace before.  Ever.

Sow And 1 over Kukic.

Norris in the right lane take.  Just like against Creighton.

The second team is winning this pseudo scrimmage.  lol

Norris with the fade away jumper.  Count it.

No full court pressure.  Pick up at halfcourt.

Sow pushes.  Then receives in paint.  Cans midrange jumper in the lane.

Talking to University of North Texas coach.  Says Joe is a good guy and nice to let him watch.  He's from the Baylor coaching tree.  Says they are good also, and central Texas teams won't play them.  He says UCSB looks really good.  lol  Pace is at a different level he says.

Coach Pimm is there also.

Kukic is playing the 5.

Now working full court press.  Hmmm...one of the coaches says it's just for show.  lol  Goal is to trap on inbound baseline.

Our 4 man is at point on the full court trap.  Looks like a 1-2-2, even tho there are man defense principles.  Norris at the point will be a problem for opponents.