This was the first official practice of the 2021-2022 Gaucho Hoops Men's Basketball season. 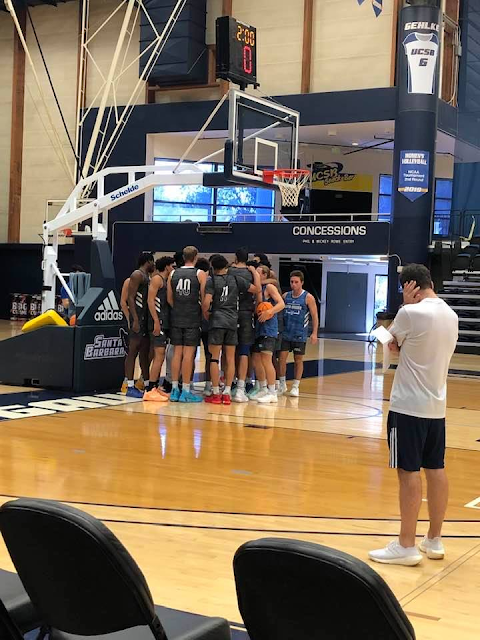 Gaucho Hoops ("GH"):  Let's start with the new players, do you have any comments on what they bring, because we kinda know what the returnees bring.

Joe Pasternack ("JP"):  Yes, we're excited.  Ajay Mitchell, is a freshman from Belgium.  He is an unbelievable decision-maker.  He can score the ball, he's a tough kid and he played at the highest levels in Belgium.  We're excited about him this year.

Cole Anderson is the third best shooter in the state of California  which says it all.  He is a prolific 3 point shooter  But he can do more, he can drive the ball and I'm excited about his development.

Ariel Bland is a young man that has tremendous potential.  He's athletic. He can drive the ball  He's a face up 4, and we're excited about his development.  Obviously, we've only had him for 8 weeks.

Calvin Wishart was not with us in games last year  He practiced last year and got hurt and had hip surgery  So he was out.  He didn't practice with us until January.  We were really excited about him until that point.  He's a really tough guy.  He really reminds me of a kid I coached at Arizona:  TJ McConnell.  Just a tough, hard nosed competitor.  He can shoot the ball;  he shot 38% from the 3 at Georgia Southern.  He's battle tested.  He started for a team that won over 20 games at Georgia Southern so we're excited about him.

GH:  He's good to go even if he had surgery?

JP:  Yeah, this was last year in January, his hip surgery.  Nope he's fine.  He's full strength ahead, he's practiced every single day.  He 's a really, really competitive, tough guard who I think is going to be really good for us.

Zach Harvey is a young man from Cincinnati.  Zach played in the AAC conference.  He's a physical wing guard that we're really excited have.  In some really big games, he hit some tremendous shots and scored against some great competition, and I think Zach's going to get better and better.

GH:  And redshirts, you don't decided that yet, right?

JP:  No we don't decide those until November.

GH:  How about some of the returning players?  We lost some great players in Jaquori and Devearl.  Let's start with Amadou.

JP:  Amadou, this is a really big year for him.  The stakes are high.  We see him having a really great year, playing at the 4 and 5 this year for us.  And we see him at the 4 with Robinson at the 5, moving him around a bit.

GH:  For the next level.

JP:  Well, for the team.  We're not worried about the next level yet.  We want to develop him so he can be the best player for his future.

GH:  Speaking of, what about Miles?

JP:  Miles, he's worked hard.   He didn't have a spring, summer and fall last year to develop.  We've had him for spring and summer this year.  Last hear he didn't have that.  He's bigger and working on improving his rebounding.  He really wants to rebound better.

GH:  And of course there's Robinson.

JP:  Robinson, he's such an amazing young man.  He's getting his graduate degree this year.  What he does for this team is immeasurable, the rebounds and assists.   He's the culture of our team, every single day in practice.  He's the rock of our team, the leader of our team.  I'm excited about him having a great senior year.

GH:  When you say culture, what do you mean?

JP:  What we're about as an organization. Being accountable, doing the right thing on and off the court.

JP:  I don't know.  I don't have a starting lineup yet.  Today is day 1.  Let's see what happens.  We have 7 perimeter players, and they're fighting for minutes every single day.  We keep stats every single day and let's see how it goes.  Ajare last year was our 6th man of the year in our conference.  He did a great job and got hurt in the conference tournament.  In the NCAA tournament, he was still hurt, and we were in the dance, and he still played so that tells you how tough he is.  And that's sort of how basketball goes, but Ajare has worked really, really hard and it's a big year for him.

GH:  What about Sekou?

JP:  Sekou Toure had a torn shoulder in the spring and had surgery  He's still not cleared.  We hope to have him cleared later this month, and actually have contact.  He has a lot of experience and he's had four years in the system.  Usually older guys in our system do better.  We're really excited about Sekou.

JP:  Josh is as good of an athlete as I've ever coached--at Arizona, Cal or Indiana.  I've never seen a faster north/south runner, a more explosive jumper, combined with more lateral quickness than Josh.  I think Josh is going to have a huge year for us.  He has an unbelievable motor, plays really hard, and can change the game with his energy.

Back to Zach, he has a lot of talent.  Today he got some offensive rebounds.  He scores in the paint, he's a physical wing, he's proven he can shoot the 3--he shot almost 40% from 3 last year for Cincinnati.

Stick around and you can get a tour of the two practice floors.

JP:  We need to sell the Thunderdome out.  Gonzaga sells out their home games--it doesn't matter who they play.  We want to have a huge home court advantage.  Tickets are selling fast.  We need the community and the students to come out and support the team.  Paul Orfalea, the Kinkos founder, is sponsoring a contest for students to see who can sell the most season tickets.  We're also working with our sponsors in Isla Vista.