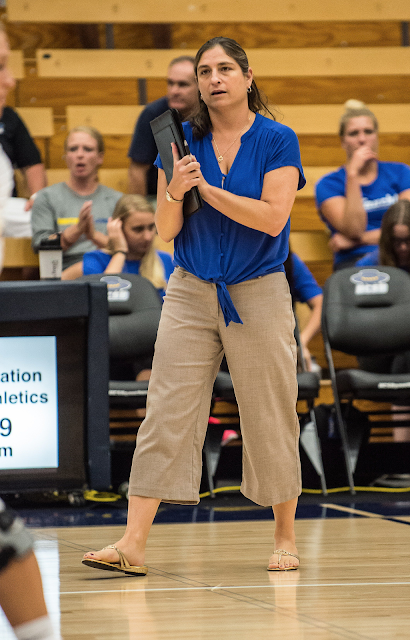 Gaucho Hoops ("GH"):  Thanks for taking the interview.  Let's start with summarizing the season up until now.

Nicole Lantagne Welch ("NLW"):  We're a little bit past the halfway point of our conference season.  We're currently at 10-2 in second place, one match behind Hawaii, who is the league leader.  Our team is known to be balanced.  We run what's called a 6-2, where we have 2 setters that come from the back row and that way, for every 3 rotations, we rotate in a new right side, and we keep 3 attackers in the front row, which allows the balance that we're creating offensively. Along with our offensive balance, our defense is a big push this year, and we are currently ranked 12th in the nation in blocks per set.  We're led by Dani Wilson who leads the conference in blocks per set and Nia who is starting her first year, is second in the conference in blocks per set.  That's one of the big reasons why we're having a lot of success.

GH:  Is part of blocking having height, hops, and size?

NLW:  Absolutely.  Your ability to move laterally across the net, but size and height are huge, and Nia is our tallest and Deni is second tallest.  Nia is 6'4" and Deni is 6'2".  Deni is not as tall, but she is pretty long.  They're all taller than me.

GH:  Comments during the UT NCAA match 3 years go were that you were known for being quick, and you didn't have the size that UT had, and yet, you almost beat them.

NLW:  Correct, so we are undersized, but we are very athletic.  We run an extremely fast offense, one of the fastest offenses in the country, and so we try to beat teams that have more size (massive players) by going fast, and making our opponents having to get to places on the court faster.

GH:  When you say fast, what do you mean?

NLW:  The sets are faster--our setting offense.  The speed from the ball leaving our setter's hands to our hitter is extremely fast, and that's why we have very dynamic athletes that can catch that speed as attackers.

GH:  And you recruit that type of player?

NLW:  The 5-1 means you just have one setter and she sets from all six rotations all the way around, and so goes in the front row as the setter, so that's the only difference.

GH:  And so you have two setters.

NLW:  Yeah, and right now, Mehana Ma'a is our starting setter.  She's a 5th year senior.  She's very experienced.  And then we have Grace McIntosh coming in after 3 rotations.  She's a sophomore.

GH:  We can go through the rotations, but Macall, she's the Libero, and she leads the conference in digs?

NLW:  She led at some point--I haven't checked this week, but she's up there for sure.  She's a very good defender and very good passer as well.

GH:  And what about the front row players?

NLW:  I think Michelle Ohwobete is leading us in kills.  She's a returning outside, number 19.  And Briana McKnight is also doing very well as an outside hitter.  She and Michelle stay in six rotations on the court, so they pass, they play defense, and they hit for us.

GH:  They're all around good players.

NLW:  Yes, Tallulah Froley--she was playing in that UT match you were referring to--she's a 5th year senior.  She has a really strong hitting percentage.  She's excellent for us on the right side.  And Tasia Farmer, who also played in that match.  She wasn't playing regularly that year, but came on late.  She's our other right side.  She's another reason why we run the 6-2.  We have these nice, good live arms and we can play fast and have success doing it.

GH:  And then of course, there's Deni.

NLW:  Yes, there's Deni and Nia in the middle, who we talked about earlier.  They're our two middle's.

GH:  Hawaii is coming here.  What's your plan of attack or strategy in the return match--without giving away too much information?

NLW:  I have Bakersfield and Cal Poly in the brain.  But we had a really close match in Hawaii.  It'll be good to get them at home.  We'll have to make a few adjustments from our first match.  They won the serve / pass match.  We need to pass better and serve better.  I think that is the biggest shift that we need to make.

GH:  When you say serving better, what do you mean?

NLW:  The first ball after whistle, the first ball initiates and we just need to be more aggressive and strategic with spots we put on the floor.

GH:  Part of that is serving to the weakest link?

NLW:  Right, or catch people out of rhythm offensively, all that stuff.

GH:  Is Cal Poly the other big challenger?

NLW:  Cal Poly, Long Beach, Hawaii and UCSB are the top 4 teams, and plus we have all of them still on our remaining schedule.  And any of the top 4 can win it.

GH:  Is there going to be a Big West Tournament after the regular season, by the way?

NLW:  No, not this year.  Some of the coaches tried to add it, but when the Big West added Bakersfield and UCSD, they wanted to do this double round and there wasn't room on the schedule yet so they decided to not have a tournament.

GH:  So the regular season champion is the number 1 seed.

GH:  In terms of the NCAA's, is it a one-bid conference?

GH:  Any comments on what to look for on the road?

NLW:  Yeah, Bakersfield plays great at home.  They took Hawaii and Long Beach to five sets.  They've have some good wins there.  They play with an edge at home, and we have to be absolutely ready and on top of our game, and respect them, and bring our A game.

NLW:  I think we need to bring it.  Every time you go on the read, there's extra visuals, so we need to dial in on serving and passing right away.  Different gyms, and spatials--you have to hone in on that right away.  It's important we have to get our setters decent balls from the fast offense which makes us so efficient.  And at the same time, we need our defense to step up, because Bakersfield is gritty at home and they're going to bring it, and play at a different level than we saw here at the Thunderdome.

GH:  When is the next homestand?

NLW:  The next home matches will be the following weekend.  We have Fullerton and Long Beach at home, that Friday and Saturday.

GH:  So we gotta get the community and students in the stands.