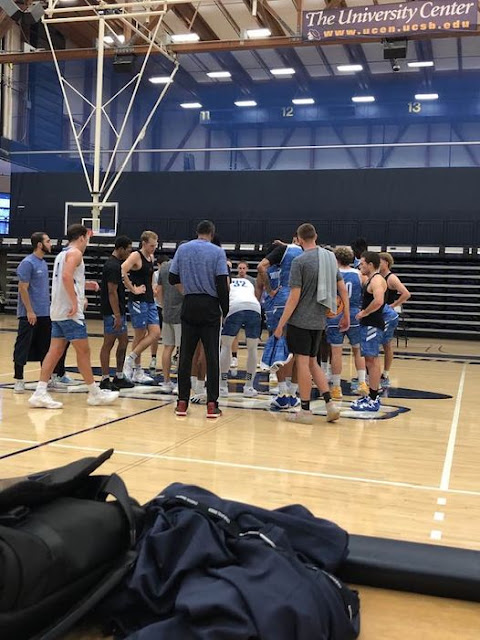 These are some notes from a UCSB Men's basketball practice on 11/3/22.

At the request of head coach Joe Pasternack, no videos of the practice can be published--even drills, but especially plays and scrimmages.  We don't want to give opponents an edge.  Having said that, if fans want to attend a practice, they should contact Coach Pasternack directly to arrange attendance at a practice.

So here are my watered down observations of this year's squad.

We are bigger, more athletic, and definitely deeper than previous squads.  Coach and I talked after the session, and he declared I was "out of my mind" for believing that, probably because as a coach, all he sees are areas of improvement required to be a championship team.  Granted, I'm no expert, but all I can do is see the differences between teams, year over year, and admittedly, it's still early.  But based on my observations, we are all of the abovementioned.

There aren't too many differences between the starting 5 and backups.  We are deep.  Sure, Andre probably has the best hands inside since Al Williams--plus, he's bigger, so he's obviously a high priority for defenders.  And he is a good passer out of the double team.  He even has a capable 3 point shot, and takes his free throws seriously--probably because he knows he'll get fouled a lot inside.  But his strength is obviously finishing inside.  Miles, Ajay, and Ajare do look stronger than last year, adding muscle to their thin frames.  Cole and Calvin look quicker.  Calvin always hustled, but his destinations seem more intentional now--he knows the system better.  The Serbian is a deadeye shooter as advertised, but he's also good at pump fakes and driving and finishing.  In fact, in 3 point shooting drills, most of the players--including the post players, are adept.  But Miles, Cole, and Metija stood out during drills.  Again, as Allen Iverson said, "this is practice"--the proof is in the pudding during games, but I have a feeling our 3 point shooting percentages will be improved this year over last year.

Miles, as usual, wins the wind sprints.  Josh, despite just coming back to practice, took off from the baseline off of two feet and threw down a thunderous two handed dunk during one drill.  He's slowly being brought back and not fully participating yet, and Zach is scheduled to practice next week.  So there are the normal, expected nagging injuries with every preseason.  Hopefully, we will be at full strength at some point.

Ajay looks like he grew an inch or two, with an improved shot.

Defense and rebounding remain areas of focus.  Coach Pasternack has mentioned them being liabilities in the past, but to my unprofessional eyes, the players are putting in a lot of effort, and have been loud in their communication, which is what I would want to see as a fan.

The backup forwards will get playing time because their strengths are defense and rebounding.  Kipruto is a beast, and provides good push back for Andre in practice.  Think of him as a quicker Robinson.  KK is not slouch on defense either, altho thinner than Kipruto, but he also adds some offense down low, and can finish with either hand.  Both Ariel and Kukic are improved as well.

I apologize if I haven't gone to great lengths to describe every returnee, and with no videos.  But I am convinced we will be a high-caliber team, even with the knowledge that there are a lot of good teams in Div. 1.  The key will come down to are we going to defend with urgency, to borrow Coach's terminology.  Getting low into a defensive stance is a constant reminder for some.  Other staples like not reaching in as a defender.  Not taking the head fake, etc.  As long as we play smart on offense--including proper spacing, we can be good offensively, given the amount of weapons we have.  One key is to get open shots going inside out on offense, and making sure V-cuts are crisp to get open.

The biggest key is we need leaders to emerge.  A redundant topic, but one which every championship team possesses.  We have leaders--we just need a couple to take the bull by the horns and make every teammate accountable on and off the court.

The players are good teammates and they get along great with each other.  They're a bunch of great kids.  The killer instinct will need to kick in once conference season approaches.