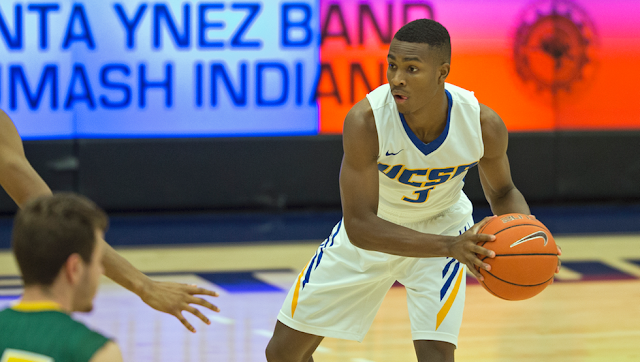 The team is making 46% of its shots, including 37% from 3-point range (they attempt 19 per game).  They make 67% of their free throws, getting to the line 20.5 times per game vs. allowing 18 FT's per contest.  Opponents are shooting 40% from the field and 31% from three-point range.  The Mustangs are dominating the boards, grabbing 14.5 more rebounds per game than their opponents.

SMU is led by Head Coach Tim Jankovich in the wake of another Larry Brown resignation. The Mustangs were banned from the NCAA tournament last season, but are eligible this season and figure to be in line for at least an at-large bid, considering the American Athletic Conference coaches picked them to finish 3rd.

6'7" junior forward Semi Ojeleye is leading the Mustangs in scoring, averaging 20.3 points per game and adding in 9 rebounds per game.  Ojeleye can hit the three-point shot (8-of-18) and gets to the free throw line and makes them (19-of-25).

6'5" sophomore guard Shake Milton was expected to be SMU's top returning player, and is contributing 12 points per game.  He likes to take the three-point shot (5 attempts per game, but has hit only 30% from downtown.  He has an excellent 3.6-to-1 assist-to-turnover ratio.

6'6" senior guard Sterling Brown started the first three games and came off the bench for 32 minutes vs. Michigan.  Brown had 8 assists in the season opener and only 5 assists since, but he's averaging 10.5 points per game and has hit 5-of-10 three-pointers.
Posted by Gaucho Greg at 11:12 AM