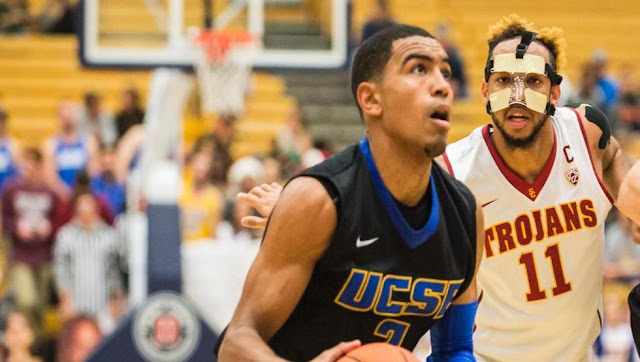 After years of turnover and turmoil under Rex Walters, USF tries for a fresh start with former Columbia coach Kyle Smith.  He inherits a team whose cupboard is pretty bare after its two best returning players -- Devin Watson and Uche Ofoegbu -- opted to transfer.  The roster is filled with ten freshmen and sophomores.  Their ESPN Basketball Power Index (BPI) rating has the program down in the 300 range, worse than any Big West school, and the Dons are picked last in the West Coast Conference.  They played four games on a 10-day European summer tour which took the team to Germany, Belgium and France in early August, and won all four games against various club teams.  So they will have had a bit more opportunity to meld as a team compared to UCSB.

In their opener, the Dons defeated a University of Illinois-Chicago team 82-80 that is coming off a 5-win season.   The Dons led by as much as 17 but let UIC come all the way back to tie it at 80-all, before finishing the Flames off with a pair of free-throws freshman by Remu Raitanen.  Senior guard Ronnie Boyce led the way with 28 points and sophomore Chase Foster led with 11 rebounds.

Boyce is the team’s leading returning scorer (11.1 ppg) and it looks like he might lead the team in that department this season.  He made three 3-pointers in the game against UIC. Sophomore Nate Renfro, a slight 6’7” wing, will also shoulder much of the scoring load and was elected team captain.  He had 12 points against UIC.

According to Coach Smith, the team doesn’t have the size to match up with the big dogs in conference but a look at their roster shows six players at 6’7” or taller, so the size is there, but perhaps not the talent.  According to the Dons message board, these younger players have looked good in the preseason:  Guards Jordan Ratinho (who was recruited by UCSB), Marquil Smith, and Charles Minland.   They are especially high on forward Matt McCarthy.  Reserve guard Mladen Djordjevic, hurt UCSB with 8 points off the bench in the Gauchos' game against the Dons last year.  Junior Chase Foster, who nabbed 11 boards against UIC, started 13 games last season and averaged 4.4 points and 1.7 rebounds

UCSB has advantages throughout the lineup but especially in size in the frontcourt.  Jalen Canty should have plenty of opportunities against his old neighbors by the Golden Gate. Ami Lakoju should also flourish in the paint.  UCSB will need to do a much better job than they did against Omaha on stopping guard penetration.  They will need to keep Boyce at bay.    Omaha is not considered a great 3-point shooting team, but they hurt UCSB from the perimeter in the season opener.  The Gaucho zone defense needs to rotate better to make sure Boyce and Renfro don’t have career games.   Shutting down Renfro on the wing will be a primary goal, and it will be interesting to see JD Slajchert and Christian Terrell take on that task.   On offense, Gabe Vincent will have to be more of a factor from the perimeter and driving the lanes.  It is a major rebuilding year for the Dons and UCSB has more pieces and continuity, which should enable the Gauchos to emerge victorious, albeit in likely another ugly early season game.