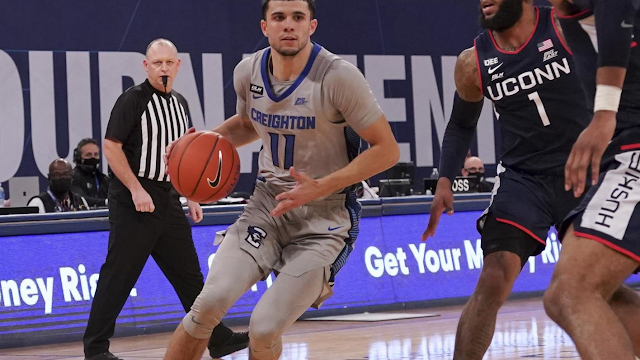 A lot's already been written about 19th-ranked Creighton and its 3-point shooting. The Bluejays ranks 18th in the nation in makes (9.7 per game) and 26th in attempts (26.5 per game). What no one has written is that the Gauchos are excellent at preventing the three. They rank 20th in 3's made against (5.8 per game) and 11th in attempts against (17.3 per game). The most 3's anyone has attempted against UCSB is 25, and CSUN lost that game by 47 points. Creighton like to get threes in transition, so our transition defense will need to be good. Otherwise, run these guys off the 3-point line.Creighton takes 44% of its shots from the 3-point line. This limits their trips to the free throw lines, where they aren't good at shooting it anyway. They rank 277th in FT attempts at 16.1 per game and rank 327th in FT% at .642%.Their long-range bombing also keeps them off the offensive glass. Creighton is 40th in the country in defensive rebounding, but 265th in offensive rebounding.Creighton's 14 league wins were three more than any other school, but the Bluejays settled for the second seed in the Big East Tournament because Villanova owned a better winning percentage. The Bluejays returned four starters and five of its top six scorers from last season's team that finished 24-7 and won a share of its first Big East regular-season title. CU's 2019-20 team was ranked No. 7 in the year-end AP poll, and this year began at No. 9. Creighton led the Big East in scoring margin (+8.7), three-point percentage (.367), three-pointers made per game (9.71), field goal percentage (.476) and field goal percentage defense (.406).    STARTERS11 Marcus Zegarowski JR G 6-2 180 Hamilton, MA Tilton School 15.5 Pts, 3.7 Reb, 4.3 Ast