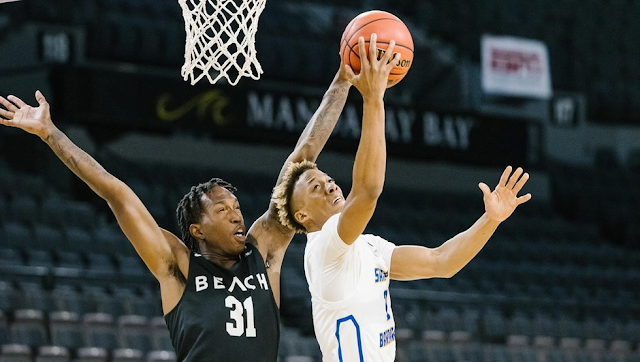 Survive and advance. Live to play another day. That's all that matters at this time of the season. Yesterday, the Gauchos found themselves playing a team punching well above its weight class. Long Beach State was young, athletic, fast and could shoot the ball a little bit. UCSB needed three Gauchos to score at least 20 points apiece and an elbow to Sanni's face to remain in front of the Elbees at the final buzzer. Survive and advance.Another team that survived and advanced was 4th-seeded UC Davis. What a year the Aggies had. In early December, Yolo County's tyrant health director shut the basketball team. They couldn't play at home. They couldn't even pick up their program and move to another location, like Stanford, Santa Clara and San Jose State were allowed to do. Players were left to sneaking around town, looking for courts where the nets hadn't been taken down. Once conference season started, UC Davis watched as weekend series after weekend series was canceled by the conference. Finally, UCD was able to take the court for what turned out to be a non-conference series at UCSD. They lost their first game by 20 points. We played a still-rusty UC Davis squad the following weekend, sweeping them 72-51 and 89-86 (OT).The current UC Davis squad is on fire. After a loss at CSUN left them 1-4 in the calendar year...and 1-2 in conference, they have lost just once...winning 7 of 8. Their latest win is a 58-56 victory over CSU Bakersfield, capped by an Ezra Manjon reverse layup with 1 second remaining. The 5-11 sophomore from Davis has taken over the role previously played by TJ Shorts II...a small, darty, fearless guard who has a knack for late-game heroics. Stop Manjon's penetration, and you've just about solved the Davis offense. In our 72-51 rout of the Aggies, Manjon was just 2-of-9 from the field for 5 points along with 2 assists. A day later, Manjon was 8-of-21 from the field, had 4 assists and scored 19 points as the Gauchos were pushed to the brink. Channel your inner Jerry Pimm. "No straight-line drives!" Yup.Sophomore Elijah Pepper is a strong, 6'4" guard/forward who can hit the three. I saw him back down McLaughlin with ease in one isolation play. He's the other guy that must be shut down (he scored 9 points in our rout, and 23 points in the OT game). He's made 45% of his threes this season!Damion Squire can also hit the three, making them at a 41% clip. He doesn't take a lot of shots, so I'd expect he's spotting up as a relief valve on the weak side. Caleb Fuller comes off the bench and is their best on the team at getting to the rack, making shots inside the arc at a 62.5% rate. Cameron Ba (5.4 ppg) and B.J. Shaw also (4.4 ppg) also see time on the floor in the Jim Les 4-in, 1-out offense.Davis is undersized on the back line. Christian Anigwe, 6'9", gets nearly half of his 4.6 boards per game on the offensive end. Kennedy Koehler, 6'7", is one of just 3 UCD players to have started every game, but he makes less than 40% of his shots from the floor. Koehler leads the team in rebounding at 5.3 per game. The aforementioned Pepper and Fuller are the other players most likely to be seen defending down low.As mentioned in another thread, UC Davis is an excellent free-throwing team. The Aggies have a FT% of .785, and they get to the line at a rate of 22 times per game. Manjon, Pepper, Squire and Fuller are all above 80%, but Anigwe and Koehler are below 70%. The Aggies' slow tempo belies their bad defensive numbers. Conference opponents make 53.5% of their shots from inside the 3-point line, the 2nd-worst percentage in the conference. They foul a lot, as well. Their 20.1 personal fouls per game are the worst in the Big West. There's no reason we should be jacking up threes when we can go inside and get some "and-ones"The Gauchos have plenty of weapons to draw from. Here's what Pasternack had to say about Amadou Sow: “I probably played Amadou a few too many minutes (29), but that’s what we had to do to win,” Pasternack said. “I told him yesterday in practice that I thought his legs — his athleticism — was the best I’ve seen all year. He’s really healthy at the right time of the year.” (Quotes courtesy of King Patton's SBNP article)Josh Pierre-Louis showed off another dimension to his game: the ability to hit a three. With Long Beach deploying a zone to compensate for the loss of Joe Hampton, Pierre-Louis showed no gumption in bombing away from the perimeter. He went 3-for-3 in the 1st half from the 3-point line on his way to a career-high 24 points on 9-of-10 shooting. “Josh was terrific,” Pasternack said. “He’s an amazing athlete and basketball player. He’s got a special future ahead of him. He really injected energy into us, as he always does when he comes into the games.”JaQuori McLaughlin scored 22 points, while Ajare Sanni was also a sparkplug off the bench driving it into the Long Beach defense. Robinson Idehen tried to play on his bad ankle but managed just 8 minutes of play. Honestly, they could avoid using him today altogether. Save him for the winner of the UC Riverside/UC Irvine tilt.UC Davis is a well-coached but undersized squad. Every year, the rest of the conference underestimates them and by the end of the season they are contenders. Jim Les is arguably the best x's and o's coach in the conference, in my opinion. If he calls a timeout, they're scoring on their next play.But UCD is the type of team UCSB is built to handle. An old adage in college basketball is that it's difficult to beat a team 3 times in one season. But we're already sitting at 2-0, and I see little reason to not believe we'll be sitting at 3-0 at about 8 o'clock tonight. Then we can sit back and watch Irvine and Riverside duke it out.