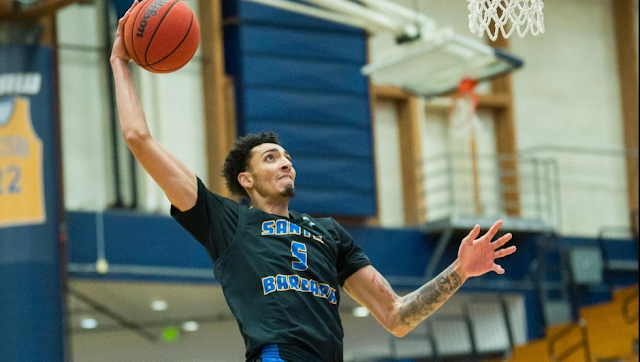 Well, surprise, surprise, we draw the one team we haven't played this season in Long Beach State. The 49ers, er, the Sharks, er, Elbee??, oh yes, The Beach made news last week by taking UC Irvine to overtime in the first game of their season-closing series, dismissing their leading scorer (Michael Carter III, 14.6 ppg) and then getting stomped by the Anteaters in their season finale. While CSUN wasn't exactly a ball of fire, you figured yesterday's first-round game between the 9 seed and the 8 seed would be close. Instead, Long Beach State posted its 2nd-largest BWT margin ever with an 85-63 demolishment of CSUN. The Beach held the Matadors to 19% shooting in racing out to a 46-26 halftime lead. CSUN trailed by as many as 30 points in the 2nd half, allowing Long Beach to clear its bench and save its key players some minutes played.Freshman Jadon Jones scored 10 points in the first to lead LBSU, finishing the contest with 19 points, 11 rebounds, 2 steals, 2 assists and a block in 34 minutes for his first collegiate double-double. Chance Hunter, Joe Hampton and RJ Rhoden also all scored in double-figures for the Beach, who finished the evening shooting 51.6 percent from the floor.Hunter and Isaiah Washington were named to the 2020-21 All-Big West Conference team as Honorable Mention. For Hunter, it is his second honorable mention selection in as many seasons at Long Beach State. Hunter averaged 12.2 points per game in Big West play, and led Long Beach State in rebounding at 6.0 boards per game. He recorded a pair of double-doubles in the regular season, and set a season-high with 23 points on the road at Hawai'i. Washington, a transfer from Iona, also received all-league honors in his first season at Long Beach State. Washington was the team's 2nd-leading scorer, and also led Long Beach State in assists at 4.4 per game. Averaging 14.3 points per game, Washington led the Big West in average minutes played, and finished in the conference's Top 10 in both scoring and assists.Inside, the Beach starts Jordan Roberts, a 6'9" senior and Joe Hampton, a 6/8" junior. For Roberts, when I say start...well, he started Tuesday for his first start of the season. He's only shooting 39% from the field, but he was 2-for-2 and scored 8 points in 24 minutes vs. CSUN. I saw Hampton play vs. Irvine last week and was impressed with his interior post moves. He has reached double figures in 4 straight games, but has pulled down just one rebound in his last 37 minutes of play. He leads the team with 15 blocks.They'll bring Trever Irish and Romelle Mansel off the bench to spell the big men. Irish is a goofy looking 7-footer who hasn't broken double digits in minutes in the last five games. He does have the highest FG% on the team (56.5) and is serviceable on the boards (8.9 rebounds per 40 minutes). He has 14 blocks. Mansel shoots just 43% from the field but has hit 9 of his last 16 shots over a 4-game stretch.As for the guards, Jones is the club's best three-point shooter at 40%...and he takes 66% of his shots from beyond the arc. Washington appears to be the point guard as he has 33% of all Long Beach assists while still managing to take 11 shots a game. Hunter also takes a lot of shots but makes them less frequently and is the one you want to put on the free throw line if the game is close (53%). Colin Slater comes off the bench and has fabulous hair, but not much else.Dan Monson is at the end of another season of turmoil in Long Beach, and is far removed from his heyday as the leader of the Big West's most feared program. The Beach is currently 6-11, but 11 of its 17 games ended with margins of 5 points or less, so they can hang most of the time. The Gauchos would be best served by jumping on this team so that they may rest some players in anticipation of needing to play 3 games in 3 days. If you let them hang around, they can bite you.